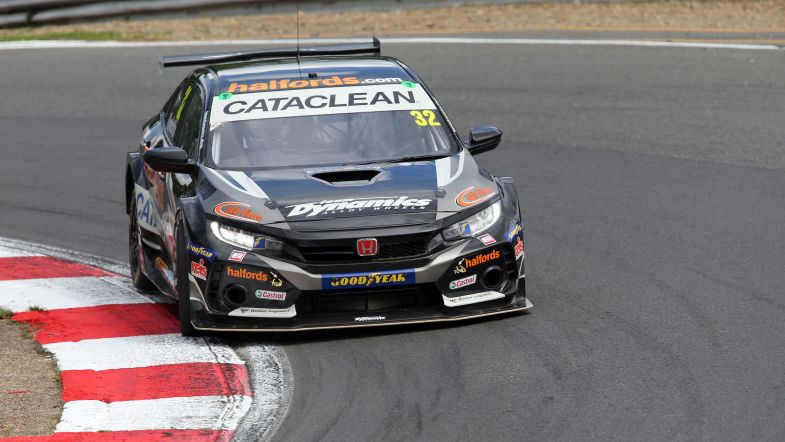 Dan Rowbottom secured his maiden BTCC win in a dramatic opening race of the weekend at Oulton Park, which had to be restarted after a multi-car accident at Lodge.

The initial start had seen Gordon Shedden blast into the lead when the lights went out as Senna Proctor was slow away from pole position, with Rowbottom storming through from the second row of the grid to move into second on the run to Old Hall for the first time.

Further down the order, Aiden Moffat’s Infiniti tangled with Colin Turkington at Cascades which forced the BMW off the road, with Ash Sutton also going off in avoidance as two of the fancied runners were seemingly taken out of contention.

Out front Shedden and Rowbottom held the lead from Adam Morgan’s BMW and the Toyota of Rory Butcher, with Proctor having slipped further down the order when he was run wide at the hairpin on lap one.

Proctor would be carving his way back through the the field and had closed onto the fight between Morgan and Butcher when the race was halted on lap seven after a clash between Jason Plato and Tom Oliphant saw the BMW tipped into a spin at Lodge.

Chris Smiley was left with nowhere to go when the BMW rolled back towards him and hit the rear of the car at speed, with fellow EXCELR8 driver Rick Parfitt then sliding into Oliphant’s stricken machine.

Once the cars had been recovered, the race restarted with a six lap sprint, with Rowbottom getting the better start to jump ahead of Shedden going into turn one.

From there, the two Dynamics cars were able to ease away from Morgan’s BMW, with Butcher in fourth spending the whole six laps defending hard to keep Stephen Jelley behind; the WSR driver having made up places on the restart from seventh.

Moffat and Plato would follow behind, with Proctor and Jack Goff rounding out the top ten.

Prior to the restart, penalties for Ollie Jackson and Josh Cook had cost them places and resulted in them starting lower down the order, although both were able to score in 12th and 15th.

Having made his way up to 14th by the time the red flag came out, Tom Ingram was unable to score having been shuffled back to 19th, with both Sutton and Turkington getting ahead on the road.

Sutton had been forced to put after his initial off but then came through on the restart to 14th – losing a spot to Dan Lloyd on the run to the line having been delayed whilst trying to get ahead of Jackson at the final corner.

Turkington however would fail to score in 18th.