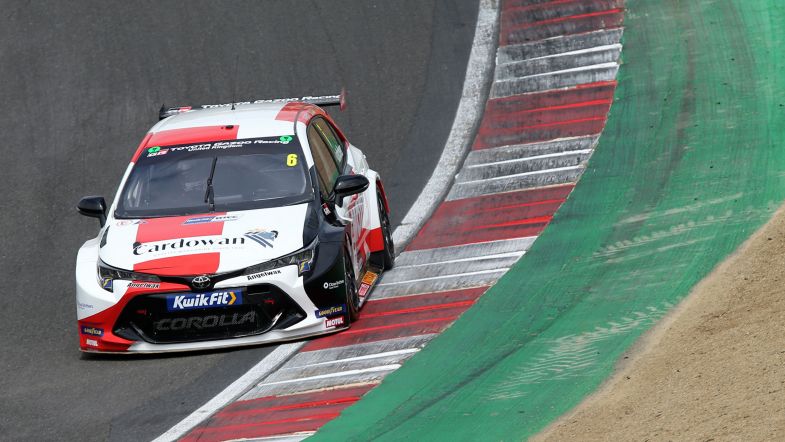 Rory Butcher secured his first win for Speedworks in the second BTCC race of the weekend at Oulton Park.

The race would get underway slightly behind schedule after a myriad of issues in the earlier races on track, with Dan Rowbottom leading the field away from the start after his race one victory.

Rowbottom held the lead into turn one from Gordon Shedden and Adam Morgan but Butcher was on a charge as he took third from Morgan going through Cascades and then managed to clear the two Hondas at the hairpin – sliding up the inside of Shedden and nipping ahead of Rowbottom,

Shedden would be forced wide at the same point as he slipped back into the pack behind, with Morgan and Jake Hill both nipping ahead on the run to the chicane.

Once out front, Butcher was able to ease to victory as Rowbottom and Morgan followed him home, with Hill taking fourth from Aiden Moffat, who squeezed past Sheedn with a fine move into the chicane on lap nine.

Shedden therefore took sixth spot from Stephen Jelley and Ash Sutton, who continued his recovery from race one by coming through to eighth spot. Senna Proctor and Tom Ingram rounded out the top ten, with Proctor drawn on pole for race three.

Ingram’s top ten meant he recovered points after the opening race, with Colin Turkington taking twelfth to add more to his tally. Josh Cook and Jack Goff were amongst those not to score after incidents on track, with Goff’s 100 per cent scoring record ending as a result.

After the accident in race one, Tom Oliphant was unable to take the start as repairs continued on his BMW but both Chris Smiley and Rick Parfitt did take part – with Smiley taking points in 14th.