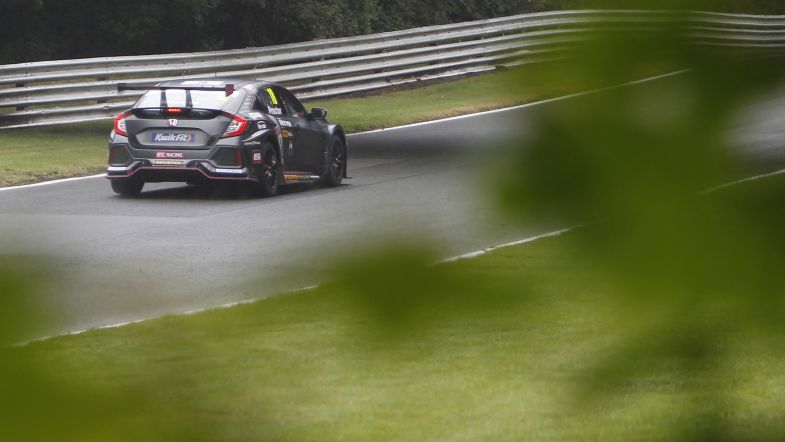 Senna Proctor secured his first win for BTC Racing in the final race of the weekend at Oulton Park, which was affected by another red flag stoppage.

The race kicked off with Proctor on pole but it was Ash Sutton who took the lead going into turn one in the Infiniti.

Before the champion could look to break away however, there was carnage behind as Sam Osborne ended up on the grass running down the Avenue and then spun back in front of the field through Cascades.

The Ford was collected by Jack Butel and Jack Mitchell, with Nicolas Hamilton also forced into retirement. Ollie Jackson, Rick Parfitt and Sam Smelt would be amongst those to go off in avoidance, with Jade Edwards also tipped into a spin by Jason Plato as they tried to avoid the spinning car.

The race was red-flagged to allow the cars of Osborne, Butel, Mitchell and Hamilton to be recovered, with Smelt heading for the pits to have damage to his car repaired. Jackson, Edwards and Parfitt would all be able to make their way back to the grid in order to take the restart.

When the race resumed, Sutton tried to go round the outside of Proctor into turn one but contact between the pair would result in Sutton spinning – luckily without being collected as the field went round him, with Tom Ingram taking to the grass.

At Cascades however, Sutton would retire when contact between Boardley and Sutton going through the left-hander saw Sutton retire with damage.

From that point on, the positions at the front would be largely unchanged, with Proctor leading from Stephen Jelley, Gordon Shedden and Aiden Moffat – who battled ahead of Adam Morgan at the chicane on lap one.

Indeed, the top seven would finish the race as they finished lap one, with the changes coming further down as Colin Turkington fought his way forwards to eighth ahead of Tom Chilton and Chris Smiley.

Ingram would score just one point for fastest lap having been forced to pit for grass to be removed from the front of the car.

The race itself would end early when Boardley lost his Infiniti going into Druids and collected Rory Butcher’s Toyota, which had been shuffled down the order as the Scot dealt with the weight being carried after race two.