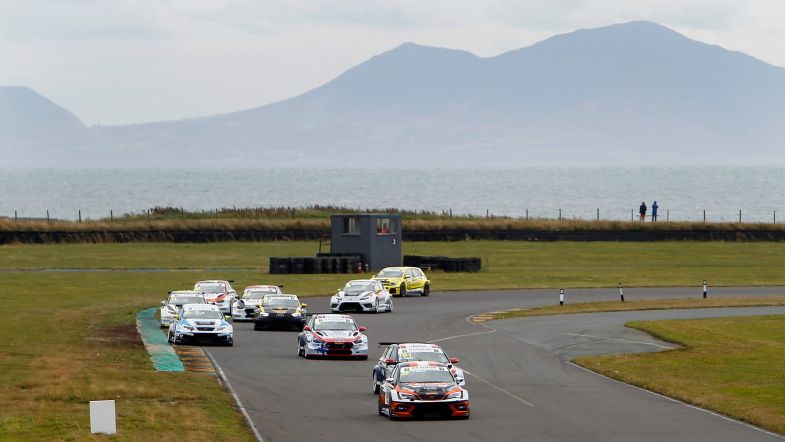 Bruce Winfield and Bradley Kent took a win apiece as the Goodyear Touring Car Trophy incorporating TCR UK headed for Wales for the penultimate meeting of the season.

A smaller eleven car field – comprising solely of TCR UK class cars – made the trip to the picturesque Anglesey circuit, with Winfield leading the way in qualifying as he snared a maiden pole in his DSG-equipped Cupra.

The Area Motorsport driver was able to convert that pole into a first win in the series as he led the opening encounter of the weekend from start-to-finish, getting away well when the lights out to retain the lead ahead of the Hyundai of Max Hart.

Hart would push hard in the early stages to get ahead but would then gradually fall away from the leader as Winfield took top honours, with the Irish driver crossing the line more than six seconds back when the chequered flag flew.

Dan Kirby rounded out the podium in his Cupra thanks to an early pass on the Hyundai of Danny Krywyj, with Bradley and Lewis Kent following behind as they got ahead of the Audi of Hugo Cook on the final lap.

That however was only after contact between Bradley Kent and Cook’s Audi, which resulted in Kent being handed a two second penalty that dropped him down to sixth in the results

Krywyj would be the only retirement after bringing his car into the pits to retire after a trip off track, with Jac Constable also requiring a stop after pitting for repairs after an excursion.

Bradley Kent would start the reverse grid second race from pole and followed Winfield’s race one lead as he remained out front throughout as his rivals squabbled for position behind – with only four other cars managing to make it to the finish.

Lewis Kent ran second to his brother on the opening lap before Kirby forced his way ahead of lap two, with contact between the pair dropping the points leader down to sixth spot. Winfield, who had jumped from sixth to fourth on the opening lap, then quickly cleared Kirby to move into second, but lacked the pace to chase down Kent out front.

After Kirby ran wide and dropped down the order Constable took third spot before Hart got ahead, but the Hyundai then retired with a technical problem and Kite’s Vauxhall dropped out with a puncture.

With Cook and Depper having already dropped out early on – and Krywyj unable to take the start – Lewis Kent suddenly up found himself third ahead of Kirby, Butler and Constable, but his hopes of a podium finish disappeared when his car slowed on the final two laps.

That allowed Kirby through to third with Constable in fourth, and Kent nursing his car to the flag; Butler having dropped out on the penultimate lap.

Hart’s DNF means Lewis Kent has now extended his lead ahead of the season finale at Donington Park at the end of the month.