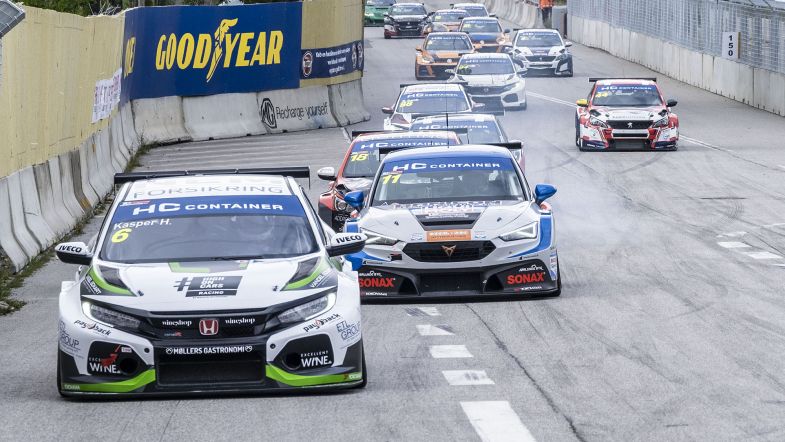 Reigning TCR Denmark champion Kasper Jensen won the final race of the weekend on the streets of Copenhagen after a tough fight with Peugeot driver Michael Markussen and Cupra driver Nicolai Sylvest.

Massive Motorsport driver Jensen started from pole and claimed the lead into Turn 1.

Markussen made progress from fourth on the grid at the beginning of the race, making his way past Race 2 winner Casper Elgaard on the first lap and Sylvest for second on the second lap.

Rain started to fall over the circuit after a couple of laps, as the fight for the lead turned into a three-car battle between Jensen, Markussen and Sylvest.

Markussen and Jensen passed each other several times, with Peugeot 308TCR driver Markussen claiming the lead – only to make a mistake and drop back to second again.

Markussen then found himself under attack from LM Motorsport driver Sylvest on the final lap, but managed to keep second.

Jensen won the race by just half a second from Markussen and six tenths of a second ahead of Sylvest.

Peugeot team-mates Gustav Birch and Elgaard were far behind in fourth and fifth, 26 and 38 seconds behind Jensen respectively.

Former points leader Jan Magnussen was once again forced to sit out the race due to the heavy damage sustained in the first race of the weekend.

This has dropped him to second position in the standings, two points behind new leader Jensen, with Elgaard third, eleven points from the lead.

The next TCR Denmark race takes place at Jyllandsringen on August 21-22.