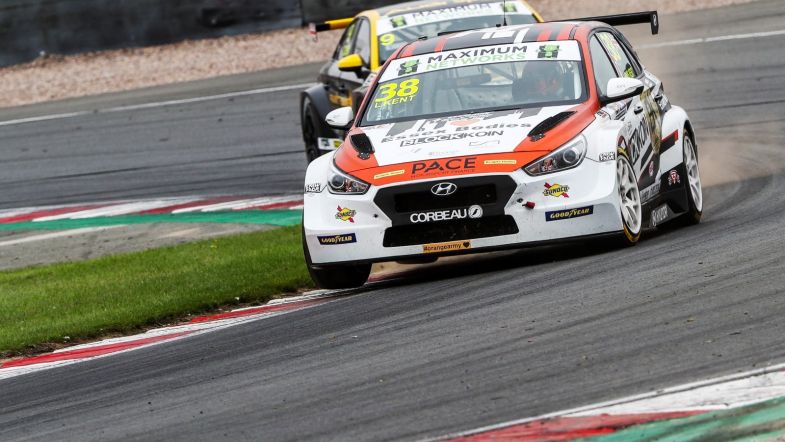 Lewis Kent successfully defended the TCR UK title despite a troublesome season finale at Donington Park that saw the Essex & Kent Motorsport driver fail to finish higher than sixth in any of the three races.

Kent led the championship standings heading into the Bank Holiday Monday meeting ahead of Dan Kirby and younger brother Bradley, with Max Hart and Bruce Winfield also still in contention heading into the triple-header.

Qualifying proved to be a dramatic affair to kick-start the final round, with a raft of track limits penalties and a late red flag following an off for Jac Constable’s Cupra leading to a tumbled up grid for the first race.

Pole would go the way of Winfield’s DSG-equipped Cupra ahead of Alex Morgan, with Bradley Kent and Constable sharing the second row, and Hart sharing row three with Hugo Cook’s Audi.

Both Kirby and Lewis Kent would face trouble however, with Kirby battling a misfire on his Power Maxed Racing Cupra and Kent left at the back of the grid for both the first and last races after losing all four of his quickest laps to track limits infringements.

The opening race of the weekend would go the way of Morgan after he battled ahead of Winfield into the lead on lap one and was then able to lead the way right through to the finish to secure his first win in the series – despite coming under attack in the final laps from Constable, who had also managed to get ahead of Winfield on lap one.

With Morgan ineligible for points however, it was Winfield who turned out the big winner in the points as he took second spot and a maximum score after getting ahead of Constable on the final lap of the race as the three Cupra drivers locked out the podium.

Bradley Kent took fourth spot ahead of Hart, who had dropped down the order after a trip off track in the early stages before recovering back through the order, with Kirby and Lewis Kent sixth and seventh after Andy Wilmot – who had taken the flag in sixth – was handed a penalty for exceeding track limits.

The reverse grid second race saw Kirby starting from pole but he would lose the lead to Hart’s Hyundai on the opening lap and then slipped to third on lap three when Constable managed to get ahead of the pair in one move going down the Craner Curves.

Constable would go on to take the win ahead of Hart, but Kirby would drop out of title contention when his car started to lose pace and he dropped down the order before being forced into the pits – rejoining a lap down and finishing at the back of the field.

Morgan would take the final podium spot after a long fight with Bradley Kent that saw the pair clash on track late on, but it was Winfield who scored the points for third after he managed to get ahead of Kent on the penultimate lap for fourth on the road, with Lewis Kent taking sixth spot having recovered from a trip off track on the opening lap.

With Kirby out of the equation, the two Kent brothers, Hart and Winfield went into race three still in the mix for title.

Morgan again started on pole but retired s the lights went out with a mechanical issue forcing him to dive off track onto the grass, which allowed Winfield to take the lead on the run to turn one.

Hart however was immediately in trouble, with his car – which had been smoking on the green flag lap – dropping to the back of the field and remaining there until the finish.

Winfield would be under pressure from Constable, Wilmot and Kirby in the early stages before Bradley Kent managed to clear Kirby to move into fourth, but a dramatic incident on lap six removed the younger Kent from the title equation.

Constable and Winfield touched down the Craner Curves whilst dicing for the lead, with Constable going off into the gravel, and Wilmot and Kent colliding as they tried to take avoiding action.

Wilmot would also end up in the gravel, whilst Kent managed to get back to the pits but would go no further.

That left Kirby running in second spot ahead of Cook and William Butler with Lewis Kent down in sixth spot having again started at the back, but that was all he needed to take the title.

As Winfield took victory to secure second in the championship standings, Kent’s top six finish meant he lifted the title by eleven points ahead of Winfield, with Kirby finishing the season in third spot.

Winfield’s points across the weekend would see him named as the winner of the Tom Walker Memorial Trophy, handed out in honour of the late Volkswagen Racing Cup driver.