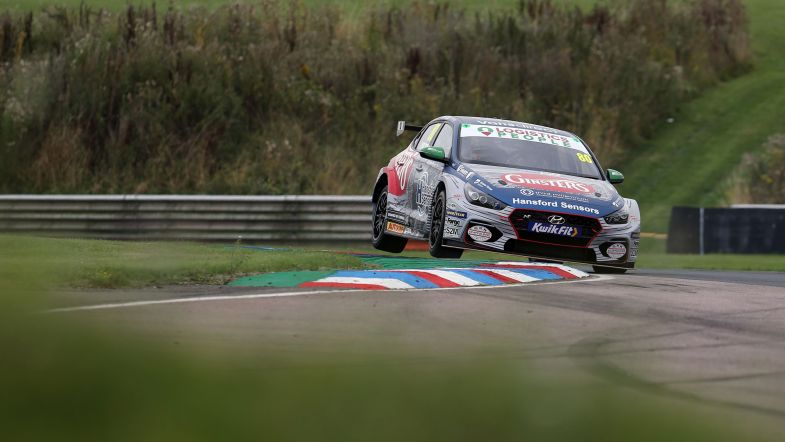 Tom Ingram admitted that his race two puncture had been a ‘kick in the teeth’ after losing ground to Ash Sutton in the BTCC title race at Thruxton.

The EXCELR8 driver went into the weekend sitting second to the defending champion in the standings and had to settle for twelfth place in qualifying thanks to the extra success ballast on his Hyundai i30 Fastback N – leaving him behind Sutton on the grid.

Ingram battled his way to tenth place in the opening race having kept fellow title rival Colin Turkington at bay in the closing stages and was then able to make impressive progress in race two to work his way up into fifth – helped by an impressive move on the Toyota of Rory Butcher.

However, a final lap puncture running up Woodham Hill saw Ingram drop back down to P12 and meant he then missed out on starting higher up the order for race three when eight was drawn for the reverse grid.

Quickly making up places at the start of race three, Ingram battled ahead of Sutton – who had extended his advantage in the opening two races – with a fine move at the chicane and then climbed up into fifth by the finish, taking the place from Butcher on the final lap.

That ensured he remains second in the standings heading to Croft, albeit having now slipped to 30 points behind Sutton.

“I love Thruxton, but we knew we were on the back foot going there with the weight we had on-board, and we had to knuckle down to try to extract the most we could from the weekend,” he said. “The car felt good, but we just struggled with the ballast in qualifying and race one was all about securing as many points as possible.

“We could remove most of the weight for race two, and the i30N really comes alive in those situations. What then happened at the end was a real kick in the teeth, because we’d pushed hard and done what we needed to do, only to lose it all to the puncture.

“The one thing we needed most of all in race three was laps, and that was the one thing we didn’t get due to the constant safety car interruptions. The Hyundai felt awesome, so it was a shame not to be able to fully exploit that, but ultimately, we still scored good points and took some back from Ash, which is what we had to do.

“It was a positive way to finish the weekend and I was particularly pleased to pinch fifth on the final lap as you never know – that extra point could prove crucial come the end of the season.”