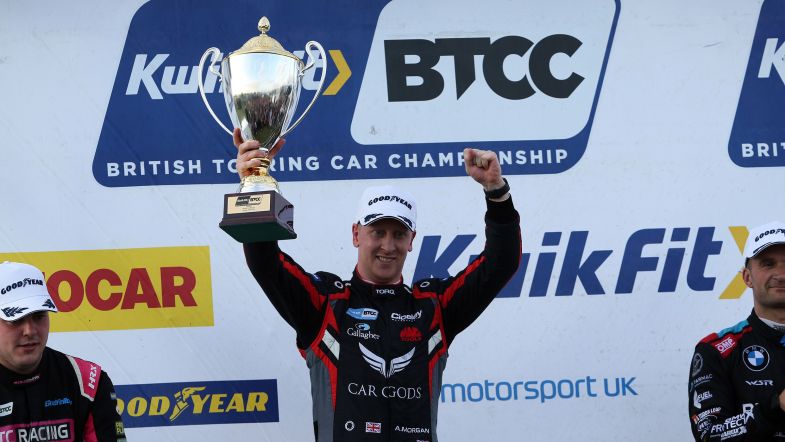 Adam Morgan: “Many more laps and I’d have been screwed!”

Adam Morgan admitted he was glad that the final race of the BTCC meeting at Thruxton had ended when it did after a late error almost cost him a second win of the 2021 season.

The Ciceley Motorsport driver had finished the opening two races of the weekend inside the top eight, which resulted in him then being drawn on the front row of the grid for race three.

From pole, Morgan held off the challenge of Colin Turkington when the lights went out and was able to keep his position despite a number of safety car periods backing up the field behind.

Heading into the latter stages, Morgan suffered a huge scare when he locked up going into the final chicane and was forced to take to the escape road, which resulted in him then having to ease off to avoid a penalty for gaining an advantage.

Morgan was able to hold on to secure the win on the road, with the victory confirmed after the incident was investigated by the stewards post-race.

“There were no safety cars all day and then I got three!” he said afterwards. “The final race was 99 per cent perfect apart from the moment at the chicane, and even though I still went on to win, I was kicking myself over it.

“I backed off to let Colin close in so we didn’t get a penalty but the tyre was shot because of the lock-up and I’d have been screwed if the race had been much longer.

“This is still a learning year for us and it’s been going pretty well with a few wins and podiums and we are getting stronger all the time. It was nice to be able to beat Colin and WSR because they are the benchmark with this car, so to hold them off is a big achievement.”