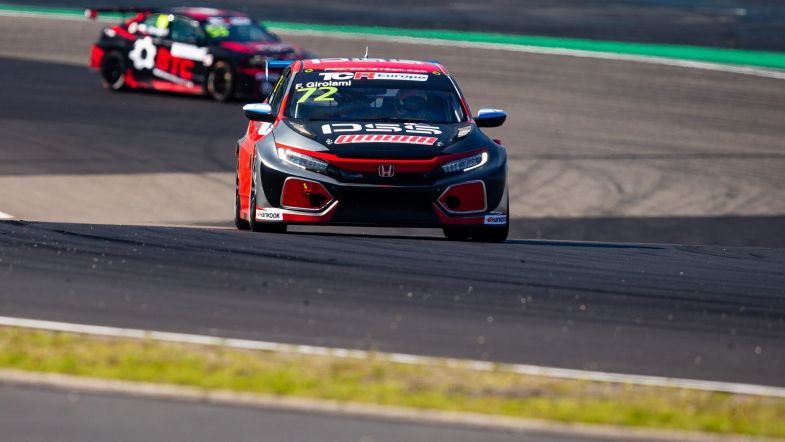 The Argentinian posted a time of 2:07.467 to emerge just over a quarter of a second ahead of Sébastien Loeb Racing’s Niels Langeveld, while FP1 pacesetter Mikel Azcona was third fastest.

Overall, it was a better session for both the Hondas and the Audis, with the two brands occupying seven of the top 10 positions at the end of the half-an-hour session.

Langeveld’s pace was prominent throughout and the Hyundai Elantra driver initially set the pace on a 2:10.484 early on in the session. Much like opening practice, the Hyundais ran in tow, with Felice Jelmini and Sami Taoufik also in the top three.

Azcona then went quickest, repeating his morning session form in his Cupra León Competición to go fastest, with Girolami the nearest challenger in second, albeit half a second in arrears.

The Honda, however, found speed and moved to the top of the pile just after the red flags were brought out for Series newcomer Łukasz Stolarcyzk went off at the exit of Turn 10 in his BTC Maszyny Audi RS 3 LMS.

Girolami’s first representative time after the interruption was his quickest, while Langeveld also improved in the closing stages to finish up three-hundredths faster than Azcona, setting up a real battle ahead of Saturday’s qualifying session.

Having missed the early minutes of the session and failing to set a serious lap-time until the halfway point, Comtoyou Racing’s Tom Coronel emerged as the best of the rest in fourth, ahead of Brtual Fish Racing’s Jack Young.

Young’s team-mate Isidro Callejas, and Brutal Fish team owner) Martin Ryba ensured there was much to be positive about in the Honda camp by setting the seventh and 10th quickest times respectively.

Indeed, having appeared to struggled at the previous round at Spa-Francorchamps, Audi finished the session with Dušan Borković eighth quickest behind Callejas, with team-mate Nicolas Baert ninth.

The interloper among the second half of the top 10 was Team Clairet Sport Peugeot’s Teddy Clairet, who continued his strong FP1 showing by setting the fifth fastest time.

Next up for TCR Europe will be qualifying which is scheduled to take place on Saturday at 10:10 CEST.