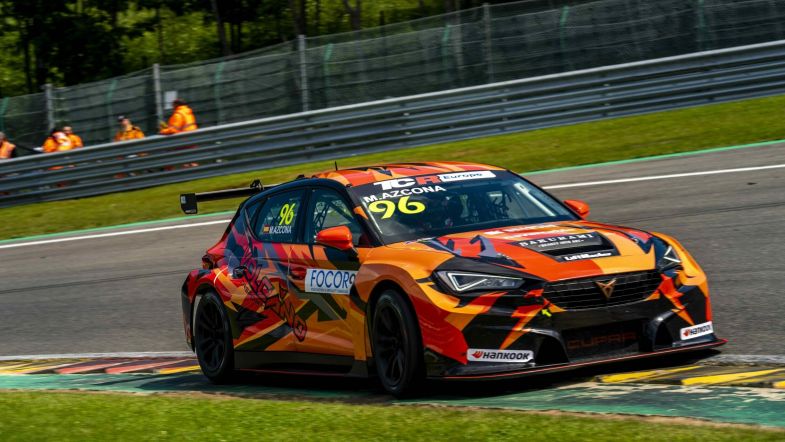 Volcano Motorsport’s Mikel Azcona set the fastest time in the opening TCR Europe free practice session as the series resumed from the summer break at the Nürburgring.

In what was ultimately an incident-free session, Sébastien Loeb Racing’s Felice Jelmini was the first driver to set a representative time, as the Hyundai Elantra TCRs towed each other around the track in the early stages.

Jelmini was soon beaten by the Team Clairet Sport Peugeot 308TCR of Teddy Clairet, who posted a time of 2:10.037.

Improvements then came thick and fast, as first Girolami went fastest before being usurped by Azcona by four-tenths of a second.

Azcona stayed top for a large chunk of the session thereafter ahead of the final efforts, which began with Girolami improving to a 2:07.461, having gone fastest of all in the first two sectors of the lap.

Azcona then responded with his own best time which was enough to end the session fastest of all.

The gap between the top two and third placed Tom Coronel was particularly large, with the Comtoyou Racing Audi RS 3 LMS some two seconds in arrears.

Clairet finished up fourth quickest, while Gavrilov was a further six-tenths further back in fifth, and second quickest of the Audis.

Having missed the previous round at Spa-Francorchamps following COVID travel restrictions from North Macedonia, Viktor Davidovski made a welcome return to action this weekend, and took his PSS Racing H0nda Civic Type-R to the eighth quickest time.

Niels Langeveld was ninth, while Dušan Borković rounded out the top ten for Sébastien Loeb Racing and Comtoyou Racing respectively.

Second practice is scheduled to take place later on today at 15:00 CEST.