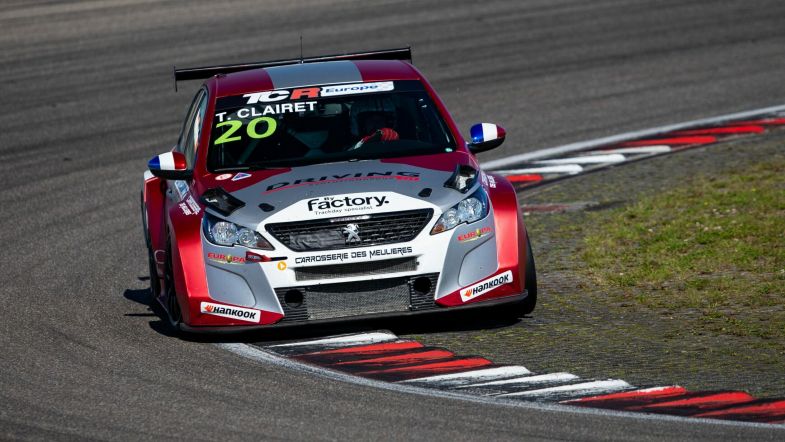 Team Clairet Sport’s Teddy Clairet says that he achieved the maximum during TCR Europe practice at the Nürburgring, following what he described as ‘huge gaps’ to the top of the field.

The Peugeot 308TCR driver finished the opening session fourth quickest before setting the sixth fastest time in the second half-hour session at the German circuit.

But the time deficit to respective pacesetters Mikel Azcona (2.262s off the pace) and Franco Girolami (1.214s) pointed to a potentially difficult weekend ahead of the French brand.

“It’s only free practice, of course, but overall our performance wasn’t too bad,” Clairet told TouringCarTimes. “But I think it’s probably at the maximum we could have achieved today.

“The gaps between the top and the rest of us are… let’s say surprising. It’ll be hard for us to fight for pole position or a top three this weekend, but that’s how it is and we have to make the most of it.

“Our car is a little bit older than the new Cupra and the Honda, so this makes it quite complicated to fight with them. Those gaps are quite unusual in TCR, rare even.”

Azcona’s margin over Girolami in the first session was eight-tenths, with the nearest challenger Tom Coronel 2.1s in arrears, leading some to suspect the Cupra was using fresh Hankook tyres.

“There’s always the question of who has new tyres and who doesn’t, especially in practice, but for me, it’s still a big margin, too big in my opinion for TCR,” said Clairet.

“I think the Cupra is going well, we have seen that a lot this season so it’s no surprise. They’ve obviously worked hard on their setup, but the gap is strange to me.”

With the top ten in qualifying determining the grid for Race 1 and that order reversed delivering the Race 2 grid, Clairet is keen to avoid talk of particular strategies in order to bag reversed grid pole.

“Qualifying is always a different story and who know, maybe we can get a good result, but I think pole is out of the question,” Clairet explained.

“You also have to consider the reversed grid race as well, so getting into the top 10 rather than just the top 12 [to make Q2] is really important. Then we have a chance.

“Anything can happen in a TCR race as well, we’ve seen that and I need to make a good start and see where it takes me. There’s no point in having a strategy to go for reversed grid pole because if you start playing with the positions, you might be P11 or P12 and take away your chance.

“So we just need to make sure we get into Q2 and then that would be a good result regardless for us.”