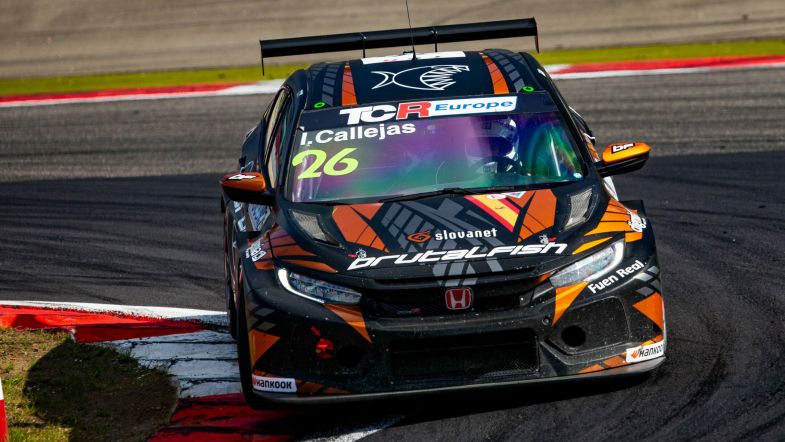 Brutal Fish Racing’s Isidro Callejas says he got too much wheel spin off the line which ultimately cost him a chance at a podium finish in the opening TCR Europe race of the weekend at the Nürburgring.

The Honda Civic Type-R TCR driver started from his maiden series pole position after a stunning late effort in qualifying but bogged down off the line, losing him the lead to Franco Girolami.

“I’m not so happy with the result of course, because the start was not good at all, I had too much wheel spin,” Callejas told TouringCarTimes.

“I knew as soon as it happened that I need to defend from Azcona and Langeveld but they confused me a bit at Turn 1.

“It’s a shame because I think the pace has been good all weekend and for sure a top five was possible from this race.”

Callejas’s race after the opening lap was promising but the Spaniard encountered brake problems in the closing stages, forcing him to go through the gravel at one corner and relegate him to seventh.

Deapite this setback, Callejas is happy that his pace has improved throughout the course of his maiden TCR Europe campaign.

“I think, if you look back to the start of the season in Slovakia, you cannot compare the performances,” Callejas explained.

“It’s such a big change and I have learned so much from the team, from Esteban [Guerrieri] and Pepe [Oriola] this season. They know everything so it is a big help to have them teach me and it has made me a better driver because of this.”

Callejas starts from tenth in tomorrow’s reversed grid race and feels he can use the natural pace from his Honda to break into the top five positions.

“The good thing is that the pace is there and we can aim for the top five,” he said.

“It will be difficult but I am slowly building more experience and hopefully I get a good start to be able to fight.”