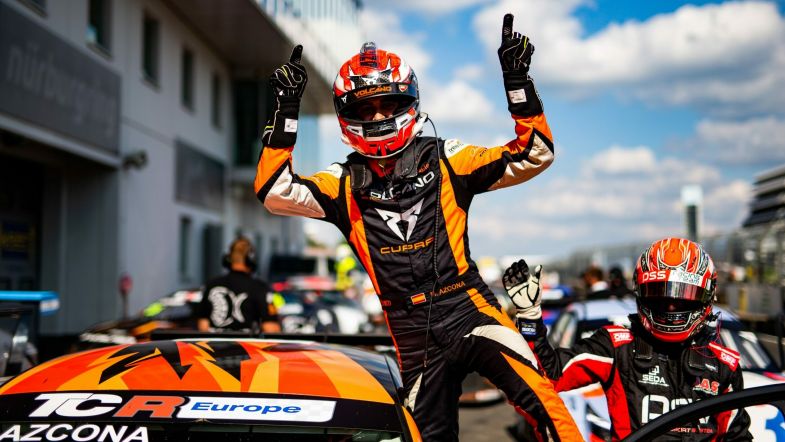 Mikel Azcona was “analysing” Girolami during epic scrap for victory

Nürburgring Race 1 winner Mikel Azcona says that he was ‘analysing’ the behaviour of Franco Girolami’s car in the closing stages as the pair duked it out for victory in Germany.

Azcona started fifth on the grid but quickly made it up to second by the fourth corner of the race, following a sensational start and a poor one from pole sitter Isidro Callejas.

Once in clean air, Azcona set about catching and passing PSS Racing’s Girolami, but the Honda driver proved to be a tough nut to crack and it took until the final lap of the race for Azcona to make the move stick.

“I feel really, really happy. We have extended the Championship lead, which is the best news,” Azcona after the race.

“It was a tough race; congratulations to Girolami, he also drove a very good race. From the beginning, I tried to analyse him; I saw a couple of corners where he was struggling a little bit more than me.

“I tried to pass him three times, but he did some really good moves. Towards the end, he was struggling with the tyres and I took the opportunity and went full attack.”

Speaking later to TouringCarTimes, Azcona said that he hadn’t been sure what to think of Girolami’s defensive driving and admitting initially feeling anger towards the Honda driver.

“I think at the time, he made a big mistake at the final corner and I was side-by-side with him, he then made a move across on me which was, I must say, quite aggressive.

“When I look at the replay, I can see that maybe he didn’t know I was there and clearly it was not deliberate, but in the car I was a bit angry at him because the move was unnecessary for me.

“But after that, we have some clean battles, it was very respectful so I told myself that I could push and overtake.”

Azcona’s fourth victory of the season means that he has extended his margin in the points standings over Girolami, with five races left this year.

And despite his late-race assault for the win, Azcona admitted that he would have settled for second had the opportunity to pass Girolami not manifested itself.

“Actually I was quite happy with second place at the time because I am fighting for the championship and I didn’t want to take any risks, so I knew that the points were the most important,” he explained.

“Of course, when he was quite slow in the chicane and at the final corner, I thought it would be a good idea to attack.”