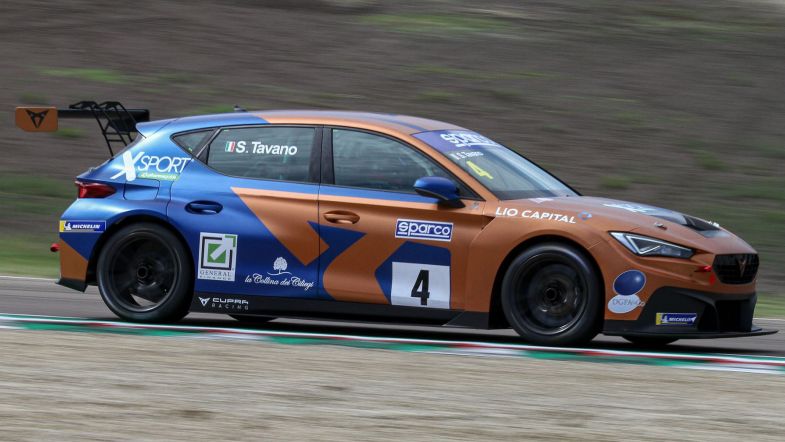 Salvatore Tavano, driving a Cupra Leon Competición for Scuderia del Girasole, took the victory in the first TCR Italy race of the weekend at Imola after a hard battle with Target Competition’s Nicola Baldan (Hyundai i30 N TCR) right up to the chequered flag.

Tavano took the lead from pole at the start of the race ahead of Volt Ruben, driving a Honda Civic Type-R TCR from ALM Motorsport, and Baldan.

Scuderia del Girasole driver Michele Imberti fended off attacks from Antti Buri (Hyundai i30 N TCR) who was recovering from ninth on the grid.

Aggressive Team’s Kevin Ceccon was also on the move, recovering up to sixth place on the second lap.

Fabio Antonello, driving a Hyundai i30 N TCR from Target Competition, crashed at Aqua Minerale after making contact with Cupra Leon Competición driver Federico Paolino. Antonello retired from the race while Guida limped back to the pits for repairs.

Baldan started his attack on second placed Ruben on the fourth lap, overtaking the Estonian shortly after, with the Honda driver coming under attack from Imberti instead.

Imberti attacked Ruben at Tamburello on lap five and claimed third position, with the Estonian soon coming under fire from Buri.

And things went from bad to worse for Ruben who then got a five-second time penalty for incorrect position on the starting grid.

Matteo Poloni, driving an Audi RS 3 LMS, stopped on the track with a technical problem on lap seven as Eric Brigliadori, driving a Hyundai i30 N TCR from BF Motorsport, climbed up to tenth place from the back of the grid.

Baldan got within striking range of Tavano on lap eight, with the Target Competition aggressively attacking the kerbs to keep up with the reigning champion.

Ceccon stopped on the track on lap ten because of a technical issue and retired from the race.

Baldan turned up the heat on Tavano on the penultimate lap as Kouril managed to overtake Buri for fifth place.

Baldan came side-by-side with Tavano several times during the last lap and the two made contact during the battle. But Tavano managed to stay ahead to take the victory ahead of Baldan, with Imberti completing the podium.

Kouril was fourth, followed by Buri and Ruben, who dropped to sixth place due to his penalty. ALM Motorsport’s Mattias Vahtel finished the race in seventh place.

Igor Stefanovski, driving a Hyundai i30 N TCR of AKK Stefanovski, crossed the line in eighth place, followed by Brigliadori.

“It was a very entertaining race, up to the last metre,” Tavano said after the race. “We were very equal throughout the race and it came close at the last corner, but it was a good race like this.”

Buri continues leading the championship with 284 points after the first race at Imola, followed by Baldan 20 points behind, and Tavano 26 points adrift.

The TCR Italy returns to action on Sunday afternoon for Race 2 at 13:00 CEST.