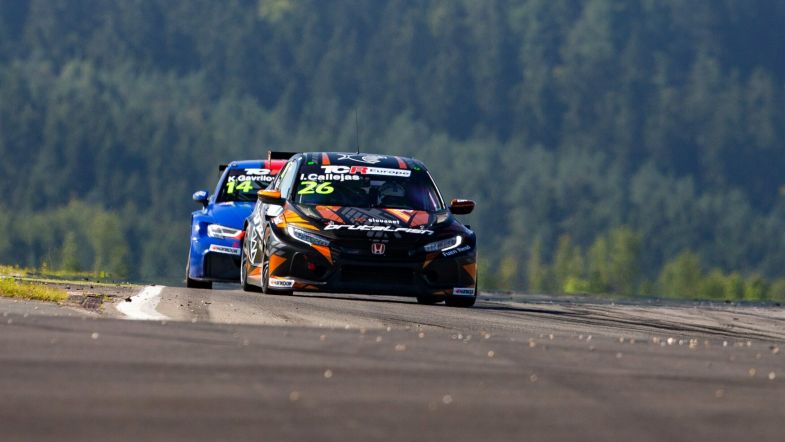 It was a double celebration for the Honda team as Callejas’s team-mate Jack Young qualified tenth for Race 1, meaning the Northern Irishman will start the reversed grid race on Sunday from pole.

Sébastien Loeb Racing’s Niels Langeveld was third on the grid for Race 1, himself only eight-hundredths away from Callejas’s fastest effort.

Having shown its hand in Friday’s free practice, the Honda Civic Type-R TCRs really came to the fore in qualifying, securing a front-row lock-out for each of the weekend’s two races.

Much like Friday’s practice sessions, conditions were almost perfect for the opening segment of qualifying, with Azcona the first driver to set a representative lap-time on a 2:08.573 before being pipped by Langeveld.

The times came tumbling down at the end of the first flying runs, with Teddy Clairet (Team Clairet Sport Peugeot 308TCR) and Tom Coronel (Comtoyou Racing Audi RS 3 LMS) each taking a turn at the top of the table.

Both were then beaten by the VRT-Racing Audi of Klim Gavrilov as the Audi’s began to demonstrate their superior form, accentuated by Dušan Borković best effort midway through the session.

Borković had looked like ending Q1 as the fastest following his final flying lap but Langeveld was nearly half a second quicker in the first sector on his last go.

The Dutchman ultimately ended up just under four-tenths quicker than Coronel, whose final lap just edged out Borković.

Despite Langeveld’s fastest time, Hyundai struggled badly during the session, with only Langeveld and Jachym Galaš making it through to Q2 for the Korean brand. None of the other Elantras made it through, with defending series champion Mehdi Bennani only managing 13th fastest.

For the five-minute session to determine pole position, Clairet set the early benchmark in his Peugeot before Girolami headed to the top on a 2:06.788, while Azcona slotted into third.

Langeveld continued his strong pace in the opening sector of his lap, but could only manage the third quickest time as Callejas took his Brutal Fish Honda to the fastest time ahead of Girolami.

That time would not be beaten in the remaining minutes as, surprisingly, the Audis faltered with Borković only managing 11th with Baert 12th.

Azcona had shown signs of troubling the top end of the table on his final lap, having set the fastest middle sector of all. But a clumsy line through the chicane cost the current points leader valuable time and he had to settle for fifth for both of the weekend’s races.

Girolami and Langeveld will line up second and third for the first race of the weekend, with Teddy Clairet an impressive fourth. Behind Azcona, Coronel was the best Audi RS 3 LMS, ahead of stablemate Gavrilov.

Race 1 is scheduled to take place later today at 14:55 CEST.