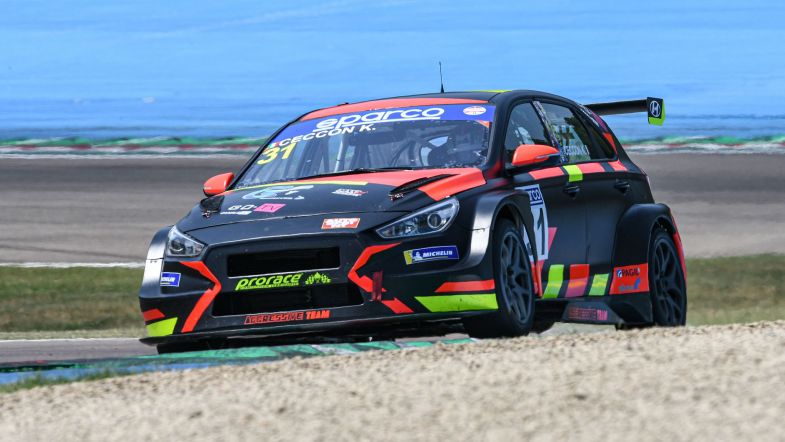 Aggressive Team’s Kevin Ceccon fought hard to fend off his rivals’ attacks to take the victory in Sunday’s second TCR Italy rave at Imola, with no less than three safety car interventions.

Matteo Poloni started from the reverse grid pole position, but was unable to retain the lead from a strong Ceccon, with Mattias Vahtel, in his a Honda Civic Type R TCR in third.

Scuderia del Girasole’s Michele Imberti and Nicola Baldan touched at Tamburello, with Baldan crossing across the gravel trap and narrowly avoiding Ceccon as he returned to the track. Baldan settled in fourth place.

Poloni lost pace, falling down the order during lap two, with Imberti coming side-by-side with Baldan as both overtook the Audi on the second lap. Baldan managed to stay ahead, climbing up to third place, as K2 Engine’s Dusan Kouril closed on Imberti.

Kouril overtook Imberti for fourth place at Rivazza on the third lap, as Vahtel closed the gap to Ceccon, attacking the leader. The scrap between the two allowed Baldan to also close the gap, with the three separated by three-tenths of a second on the fourth lap.

Baldan received a five-second time penalty for cutting across the gravel at Tamburello on the opening lap, whilst the stewards also ruled that the contact with Imberti was a racing incident.

RC2 Junior Team’s Felipe Fernández spun off the track after contact from Tavano, with the Spaniard able to return to the track on his own power. The incident would be investigated by the stewards after the race.

The safety car was called into action as Sergio Lopez found his Cupra stuck in the gravel trap after a collision of Riccardo Romagnoli. The safety car stayed on the track for two laps.

At the restart Ceccon kept the lead as Vahtel came under fire from Baldan. But the race wouldn’t remain green for long as Kouril and Buri came together at the exit of Acqua Minerale on the seventh lap, with the K2 Engine driver not seeing the Target Competition car and sending the Finn into the barriers, with the safety car coming into action for the second time.

Ceccon came under fire from Vahtel at the restart, with the Estonian attacking for the lead on the outside at Tamburello. Vahtel would lose second place to Baldan at Piratella.

Poloni tried an overtake on Imberti at Tosa on lap twelve, pushing the Cupra towards the outside and with both ending up against the barriers, the safety car called into action for the third time.

The race was relaunched with one flying lap left, with Ceccon leading ahead of Baldan and Vahtel. Tavano, in fifth place, was fending off the attacks from BF Motorsport’s Eric Brigliadori in a recovery effort from 20th on the grid.

The positions remained stable during the final lap, with Ceccon winning ahead of Vahtel and Kouril completing the podium.

Tavano was fourth, ahead of Brigliadori and AKK Stefanovski’s Igor Stefanovski.

Marco Iannotta was seventh ahead of Baldan, who dropped to eighth because of his time penalty. Federico Paolino and Romagnoli completed the top ten.

“We have an opportunity for Mugello,” Ceccon said after the race. “We have done a good job and I think we have options at Mugello if the conditions are good.”

After the fifth round of the season the championship is hotter than ever, with Tavano leading with 295 points. Baldan is second with 287, one more than Buri and with Ceccon a further point adrift, with one round to go.

The last round of the season takes place at Mugello on 8-10th of October.