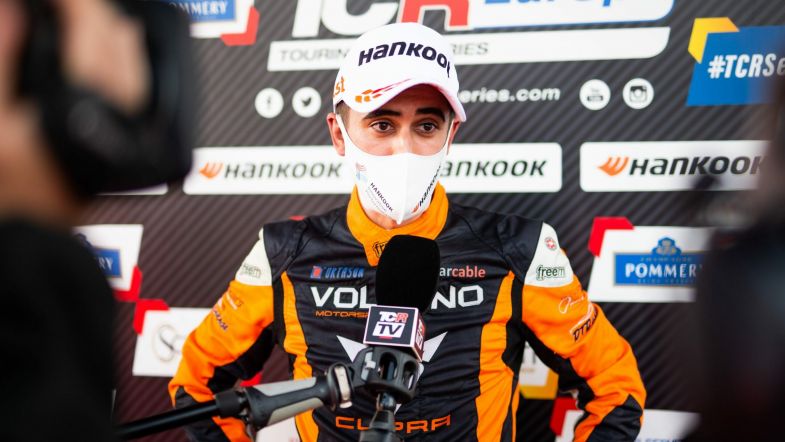 Runaway TCR Europe series points leader Mikel Azcona says he could not imagine winning as much as he has done this year so far, after an ‘incredible weekend’.

The Volcano Motorsport Cupra driver took his fifth win of the season in Race 2 at the Nürburgring, his second double victory in a row after Spa-Francorchamps and now holds a 37-point advantage heading into the penultimate round of the season at Monza.

Indeed, the nature of Azcona’s latest clean-sweep of victories was particularly impressive, having fought through from fifth and six on the grid respectively.

“I’ve been driving in this Championship since 2018 and I remember I only won one race during the entire season when I became champion,” Azcona said post-race.

“I think it’s easier with a new model of car and the experience of what we are doing together; the car now is amazing. At the same time I feel I am at a high level but I am surprised to be winning so many races.”

Azcona naturally put his start performance as the key to securing his victory in Race 2, much as he had done in Race 1.

“The start again was a key moment; I did a really good launch, Davidovski lost some positions and I used the opportunity. I could overtake two or three places around the outside and afterwards I was very comfortable behind [Brutal Fish Racing’s] Jack Young.

“When I saw the Honda behind me I asked on the radio ‘is that Girolami or Davidovski?’ and the team said ‘it’s Girolami – push, push!’

“Young didn’t really block me, so it was very easy for me and after that it was just managing the gap. A good, comfortable race for me.”

Despite a healthy lead in the standings, Azcona may be forced into a decision as to whether he prioritises the planned World Touring Car Cup round at Most in the Czech Republic, or his home TCR Europe meeting at Barcelona which is the season-finale.

As it stands, Azcona has already dropped two scores after missing the Zandvoort round earlier in the year to focus on his PURE ETCR commitments, and cannot afford to drop another round if he is to win the title.

Nearest title rival Franco Girolami stood to drop 25 points coming into this weekend, so a non-score for Azcona at Barcelona and a strong points haul for Girolami could prove decisive.

For Azcona, if there is still a clash come October, his decision is straightforward.

“I don’t think it has been confirmed yet, but if there is a clash and I can still win the TCR Europe title, I will race in Barcelona,” Azcona told TouringCarTimes.

“Of course, in a perfect world, I want to win the title in Monza so that I can still achieve some good results in WTCR, but it is also my home race so I think I will do that round, yes.”