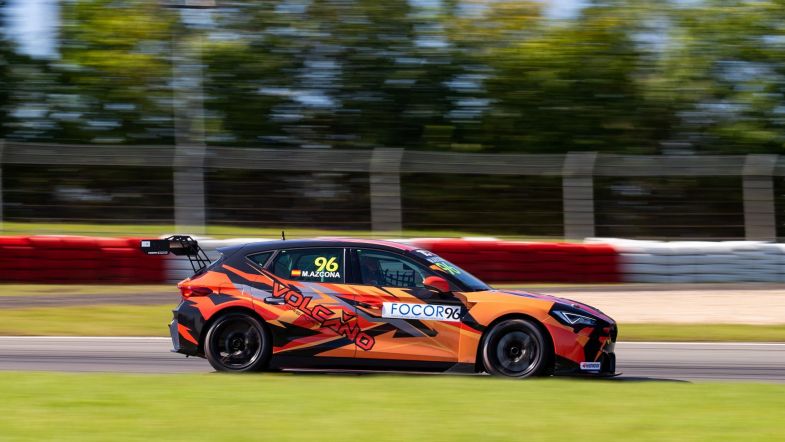 Mikel Azcona romps to another TCR Europe double at the Nürburgring

Volcano Motorsport’s Mikel Azcona produced another sensational drive to complete a clean-sweep of TCR Europe victories at the Nürburgring and continue his march towards a second series title.

Starting sixth for the reversed-grid second race, Azcona repeated his strong getaway off the line to march all the way up to second exiting the first turn as polesitter Jack Young led the early laps.

But Azcona had far superior pace and duly overhaed the Honda Civic Type-R into the chicane of the third lap of 11 and was never caught thereafter.

Young had to make do with third at the end, having fallen behind PSS Racing’s Franco Girolami soon after relinquishing the lead.

Having vaulted from fifth to second in race one, Azcona’s start in this race was even better and the Spaniard took the outside line in the turn one hairpin after front-row starter Viktor Davidovski bogged down.

Jachym Galaš assumed third place, despite being involved in a pincer incident with Klim Gavrilov’s Audi RS 3 LMS which tapped Davidovski into a half-spin at turn four.

Galaš had a near-miss of his own before the end of the opening lap, as the Hyundai i30 N TCR got a big twitch of opposite lock coming through the Schumacher Esses, but the Slovakian was able to hold his place for another lap before Girolami perfected a lovely cutback move to seize third.

The Hyundai eventually got shuffled down the order when first Teddy Clairet (Team Clairet Sport Peugeot) and then Niels Langeveld barged their way through.

At the front, Azcona was piling on the pressure on Young for the lead and the Cupra León Competición made an assertive move to the inside of the chicane to snatch the lead comfortably.

Young, lacking pace coming out of the final corner, was then subject to a Girolami lunge under braking into the first turn, with the Argentinian making the move stick on entry.

But nothing could stop Azcona, who extended his margin at the top to over four seconds by the end of the race.

Girolami was an untroubled second at the flag, while Young missed out on his second podium of the season – after a second place at Zandvoort – after being tagged by Clairet at turn three.

Off the podium, Young was fourth, just ahead of Langeveld while Galaš’s eventful race was rewarded with sixth place.

The next for TCR Europe will take place at Monza on the weekend of 24-26th September.