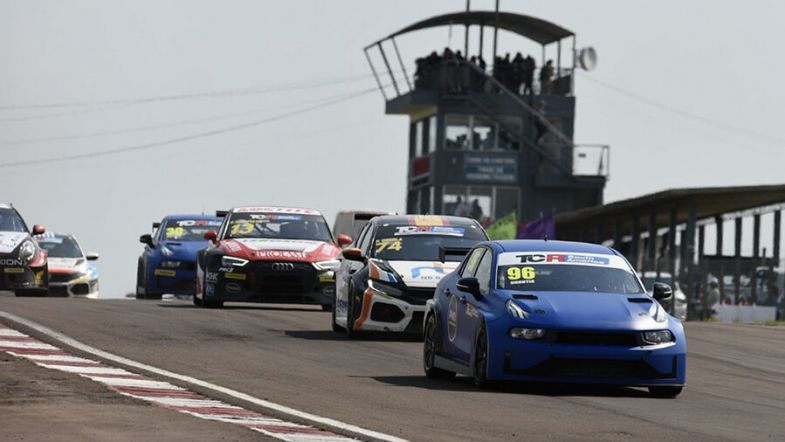 Santiago Urrutia and Pepe Oriola took a win apiece in the latest rounds of the TCR South America season at the Autódromo Eduardo P. Cabrera.

Urrutia had qualified on pole on Saturday and the Lynk & Co racer held onto the lead at the start of race one despite Oriola’s best effort to get ahead on the run to turn one, with the pair quickly gapping the Hyundai of Rodrigo Aramendia and the Honda of Cyro Fontes.

Fontes would only hold the place until lap two when the fast-starting Alfa Romeo of Fabricio Larratea sneaked ahead, but he then slipped back behind both Fontes and the second Lynk & Co of Pablo Otero the following lap in what was becoming a huge fight for third.

Rodrigo Baptista meanwhile was up into the top ten having missed qualifying, and quickly making up ground.

On lap four, Fontes sneaked ahead of Aramendia to take third spot and was quickly followed by Larratea, with Urrutia and Oriola driving away from the field at the front.

Ayrton Chorne and Raphael Reis had also joined the fight for third, but contact at turn one allowed Enrique Maglione’s Hyundai to sneak though and also gave Baptista chance to make up more ground.

He soon foubd himself in fifth and chased down Larratea’s Alfa Romeo but would then find it harder to make up further ground as battles contined to rage behind.

Most notably, Reis and Chorne made contact that saw the latter lucky to avoid a trip into the tyres.

At the front Urrutia’s lead over Oriola was being kept in check with Fontes running in a lonely third and Larratea still fighting to keep Baptista at bay.

Suddenly however, Fontes ran into trouble and the safety car was deployed to allow his Civic Type-R TCR to be recovered. Crucially, just before the caution, Baptista would get ahead of Larratea into what was now third spot, putting him right behind Oriola for the restart.

With Fontes recovered to the pits, the action resumed in what would be a blast to the flag across four laps.

Urrutia nailed the restart to remain ahead of Oriola and Baptista, with Larratea droping back behind Otero and Reis before a spin for Gonzalo Reilly saw him clatter into the tyres, with his car coming to rest on the side of the circuit.

Despite the position of the car, racing continued with Oriola trying to put Urrutia under pressure ror the lead and both Otero and Reis getting ahead of Baptista – aiiding Oriola’s championship bid.

Oriola was unable to make a move stick however and Urrutia took the win, with Otero taking third from Reis, an ailing Baptista and Larratea. Chorne and Adalberto Baptista rounded out the top eight.

Chorne, Fontes and Reilly would all fail to take the start of race two, which got underway with Otero on pole ahead of Adalberto Baptista and Larratea.

Otero duly held the lead off the line but behind, both Oriola and Urrutia were on a charge to jump up to fourth and fifth spot.

By the end of the opening lap, Oriola has cleared Larratea to move into third and was quickly followed by Urrutia, with the pair then clearly Baptista’s Audi with ease on lap two.

The Audi would continue to drop down the order, as both Aramendia and Maglione then swept through going into lap three.

At the front, Otero was soon under pressuyre from Oriola and the Spaniard tried to make a move at the final complex at the end of lap three only to be forced to defend from Urrutia behind, with Larratea and Aramendia following behind.

Oriola finally managed to sneak down the inside of Otero to take the lead, and the Argentine driver didn’t then defend when Urrutia followed suit to move into second.

Having once again been forced to start from the back, Rodrigo Baptista climbed up into the top six by lap five although his progress wasn’t as swift as in the earlier encounter.

In much the same way as Oriola had kept Urrutia honest in race one, so the Lynk & Co held on the rear of the Honda in race two, with the points leader unable to break away from his pursuer.

Otero had dropped away from the battle but held on to third ahead of Larratea, with Baptista catching Aramendia before sweeping ahead into fifth.

Otero’s hold on third was coming under increasing pressure from Larratea, with the squabble between the pair allowing Baptista to close in and make it a three-way battle for the final place on the podium.

Before either Larratea or Baptista could make a move however, the safety car was deployed and closed up the field – which also eradicated the lead that Oriola and Urrutia had established out front.

After a single lap under caution, the action resumed and immediately, there were issues for Urrutia as he slowed going through turn one and then retired to the pits, promoting Otero and Larratea into the podium places and allowing Baptista to make up another place into fourth.

Larratea then ran wide whilst trying to pass Otero but was able to recover in time to keep Baptista behind, all of which enabled Oriola to ease away at the front.

The Spaniard wrapped up the win with relative ease as all eyes were focused on the fight for second spot, with Otero giving his all to try and keep Larratea and Baptista at bay.

Going into the final lap, Larratea tried to make a move into turn one but couldn’t get ahead and instead, Baptista saw his chance to get ahead of the pair and stole second spot.

Larratea would clear Otero but for third rather than second, leaving the Lynk & Co to miss out on the podium places.

Aramendia took fifth ahead of Maglione, with Adalberto Baptista the final drive on the lead lap, albeit well down after contact with Maglione at the start of the final lap.

Following the weekend, Oriola has extended his lead over Rodrigo Baptista to 25 points, with Reis losing ground in third after ending the second race two laps down in ninth spot.