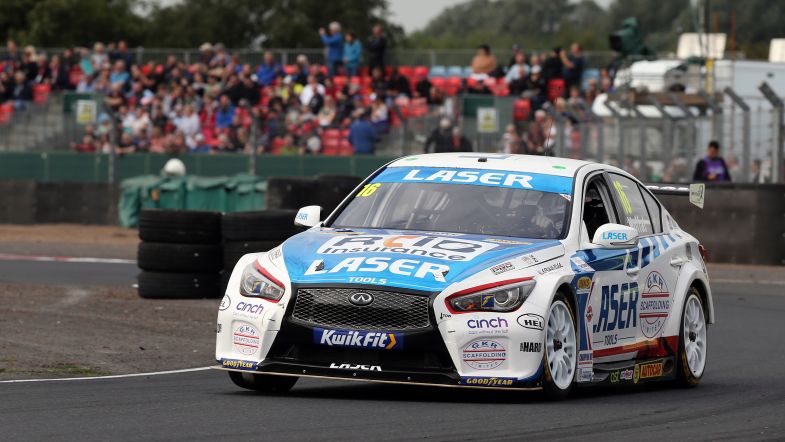 Aiden Moffat converted his first pole in the British Touring Car Championship into a maiden victory in the Infiniti Q50 with a lights-to-flag success in the opening race of the weekend at Croft.

The Laser Tools Racing driver had edged out Jake Hill’s Ford Focus for pole on Saturday afternoon at the North Yorkshire circuit and lined up at the head of the field for race one with the threat of rain lingering after light showers fell shortly before the start.

The rain would hold off as the lights went out for the start, with Moffat leading the field down to turn one ahead of Hill, with Colin Turkington trying to get ahead of the Ford going through turn one.

The pair would run side-by-side through Hawthorn with Hill taking to the escape road to avoid clattering the tyres and keeping hold of the place. Turkington meanwhile would come under pressure from Senna Proctor’s Honda and dropped back to fourth.

Hill would put pressure on Moffat through the early laps before the safety car was deployed following an incident for Dan Rowbottom going into the complex.

Rowbottom had run inside the top ten in the opening laps before dropping down the order after getting involved in a clash with Chris Smiley and Ollie Jackson at the hairpin, with three cars into one not working.

Jackson was tipped into a spin that forced him out with damaged suspension, with Rowbottom losing places. The Honda driver would then be hit by Aron Taylor-Smith’s Cupra going lap four and with his car in the tyres, the race went under caution.

After the restart. Moffat was able to hold onto the lead ahead of Hill in what would become a relatively quiet run to the flag, with little in the way of action towards the front of the field.

Although Hill tried to find a way ahead on more than one occasion, Moffat was able to place his Infiniti in the right position lap after lap, with Hill having a half-hearted lunge on the final lap before settling for second spot.

It meant a first win for Moffat since Silverstone 2018, with Hill following behind and Proctor taking third as he was able to keep his car ahead of Turkington.

Josh Cook took fifth spot after battling his way ahead of Tom Oliphant on the opening lap and then sneaking past the similar BMW of Adam Morgan.

Morgan would also lose a spot to Ash Sutton before the caution period and then slipped back to eighth after the restart when Chris Smiley launched a move at Tower that he then completed on the run up through the Esses.

Dan Lloyd and Gordon Shedden rounded out the top ten, with a late move from Lloyd on Stephen Jelley seeing the WSR driver slip down to 13th spot.

Oliphant’s bid for a top six finish would be ended on the opening lap when he was forced off at Sunny In on the opening lap and ended up back in 20th place, just one spot behind Rory Butcher who could only climb to 19th from the back of the grid.

Tom Ingram meanwhile was able to work his way from 21st on the grid up to twelfth after a troublesome qualifying session in his Hyundai.