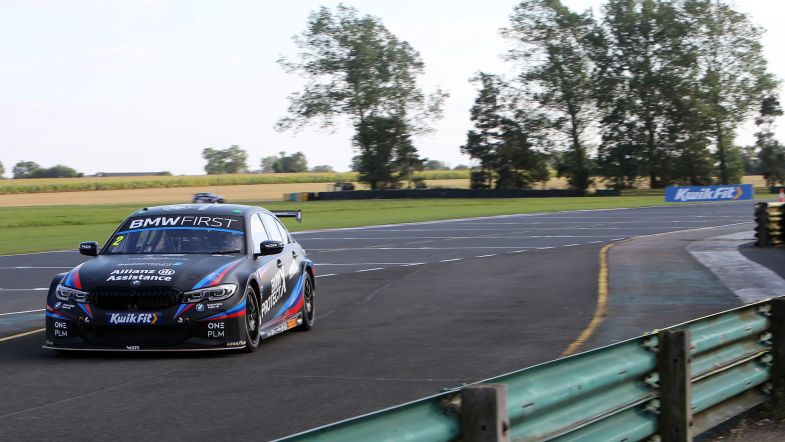 Colin Turkington added to his impressive win record at Croft with victory in the final race of the weekend.

Having started on the reverse grid pole, Turkington led the field into turn one ahead of Gordon Shedden, who got away well in the Honda to hold onto second spot – with Ash Sutton braking late into the turn to keep Tom Ingram’s Hyundai at bay.

At the back however, a multi-car clash saw Dan Lloyd go off into the gravel and also saw Jack Mitchell, Ollie Jackson, Jade Edwards and Jack Goff pick up damage that would see then forced into retirement.

The race went under caution until the third lap with Turkington soon building a lead ahead of Shedden as the Honda driver was forced to try and defend his position to keep the defending champion behind.

With Ingram, Josh Cook and Aiden Moffat spaced out behind, the fight for seventh became one to watch as a ballast-heavy Jake Hikll was forced to keep Senna Proctor, Dan Rowbottom and Sam Osborne at bay.

Osborne was in fighting mood but when he was tagged by Tom Chilton at the hairpin whilst going three-wide with Rory Butcher, the Ford man was forced to pit and dropped out of the battle.

As Turkington steamed away at the front, Sutton was pushing hard to try and get ahead of Shedden, and got alongside going into the hairpin on lap 14 but couldn’t get ahead.

Sutton would try again on the final lap but had to concede defeat as the Honda held on to take second behind Turkington, with the WSR driver making it 13 wins at the circuit.

Ingram, Cook and Moffat rounded out the top six from Hill, Proctor and Rowbottom with the top ten ultimately completed by Chilton.

Butcher had to settle for eleventh having started right at the back.

Both Adam Morgan and Stephen Jelley had been inside the top ten early on before spins at the complex on lap eight dropped them down the order, whilst Jason Plato was another driver to go around with a high-speed off at Sunny forcing him to pit for a tyre change.