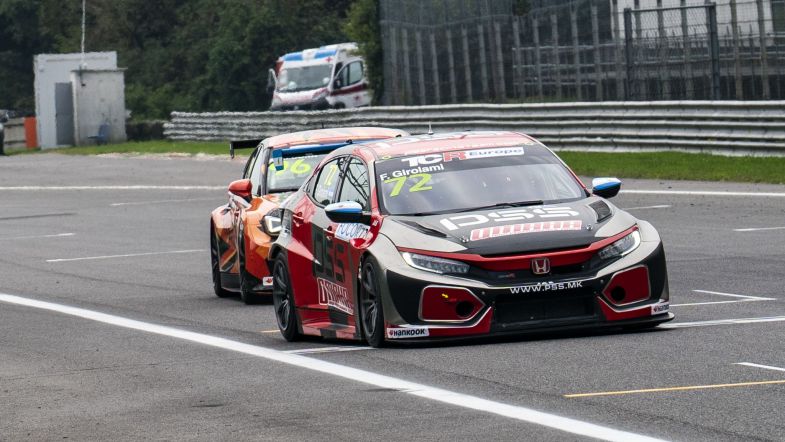 PSS Racing Team driver Franco Girolami had to defend hard in Race 1 at Monza from Volcano Motorsport’s Mikel Azcona to claim his second victory of the 2021 TCR Europe, with the Spaniard believing the Argentinian was out of order.

Girolami led the race from the start, whilst Azcona recovered from seventh on the grid up to third place. A tyre failure for Sébastien Loeb Racing’s Felice Jelmini (Hyundai Elantra N TCR) with three laps to go left clear air for the Spaniard to close the gap to the leader.

Azcona spent the last two laps of the race glued to Girolami’s rear bumper, with the Cupra driver trying to overtake at the main straight on the last lap. Girolami moved across and squeezed Azcona, a move not welcomed by the championship leader.

“After that Jelmini stopped with a puncture and I saw that Franco was struggling, so I thought it was possible to catch him,” said Azcona after the race.

“During the last lap we touched. I understand his position, he wanted to win for the championship, but we had some contact on the straight line that was too much for me.

“Usually this is not a problem, like in the last corner, because this is touring car racing. But on the straight it’s dangerous and I think we should respect each other. In any case I have to congratulate him.”

Girolami believes his actions weren’t more than proper touring car racing: “Yes, we had a little touch, but I think it’s part of the race.

“I made a mistake during the penultimate lap, as I saw Azcona’s car in the mirror closing the gap quickly. I tried to push, but it was too much so I went wide, and this helped him to catch me up.

“I tried my best to defend my position. It is true that we had some contact, but it was fair enough,” concluded Girolami.

After the first race at Monza, the two championship leaders are now separated by just 26 points.