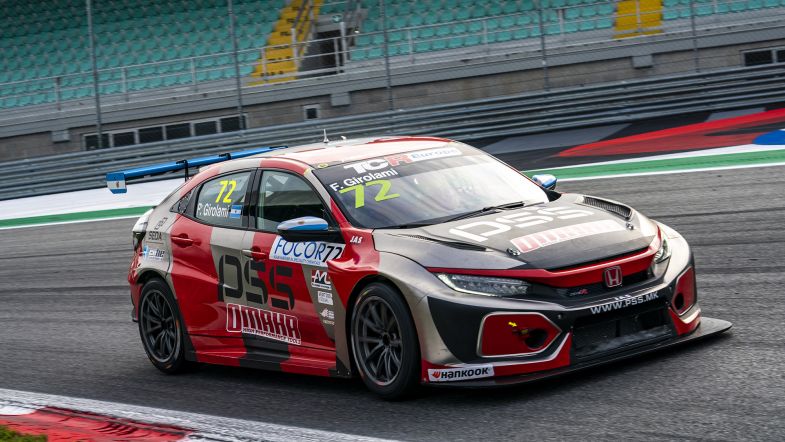 Franco Girolami claimed his second straight victory after a tense second TCR Europe race at Monza, surviving attacks from title rival Mikel Azcona who was hit with a penalty.

Comtoyou Racing driver Nicolas Baert started from pole position and claimed the lead into the first corner while Volcano Motorsport driver Azcona made his way up to third place behind Peugeot 308TCR driver Jimmy Clairet.

Azcona soon put in an attack on Clairet, hitting the Peugeot driver from behind at the final corner and went past up into second place.

This contact was part of a five-second penalty for the Cupra driver, along with a track limit breach.

Azcona was then passed by Honda driver Girolami at the exit of the second Variante chicane where there was a yellow flag due to the stranded car of Rubén Fernández.

PSS Racing driver Girolami then set off after race leader Baert, making a daring pass on the outside of the Audi driver into Turn 1 on lap four.

The two then fought hard for the lead, only for Azcona to make a mistake at the 2nd Variante chicane, enabling Baert and Mat’o Homola to get past.

Azcona was able to get back past the two, but was unable to get close enough to try and pass Girolami before the end of the race.

Girolami won the race just ahead of Azcona who was dropped to fifth position due to his penalty.

Jimmy Clairet and Dusak Borkovic rounded off the top eight.

Azcona is still on top of the standings, but Girolami has closed the gap from 37 points ahead of the weekend to just ten points. The dropped points regulation however means that the gap is 35 points between the two. Coronel has climbed to a distant third, 129 points behind.

The TCR Europe season finale will take place at Barcelona on October 9-10.