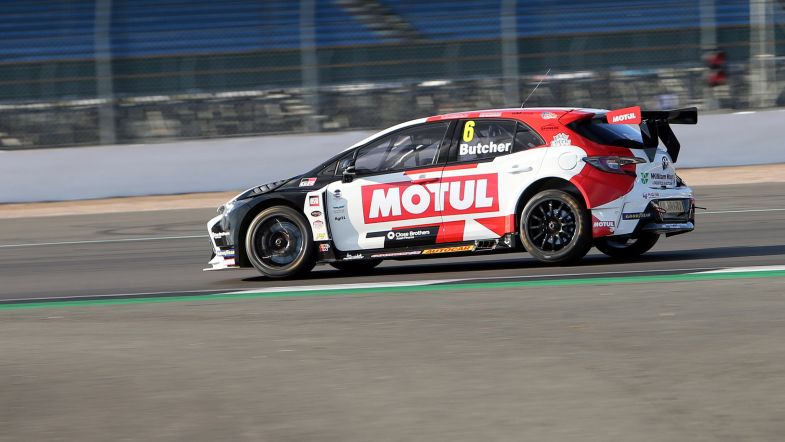 Rory Butcher converted pole position into victory in the opening race of the weekend at Silverstone, although the win remains provisional pending a possible investigation into his move for the lead.

Butcher had started the race from pole position but the whole grid would be moved back a row for the start after one of the British F4 cars dropped oil on the circuit in the race that was due to be held before the touring cars hit the track.

Although that meant Butcher got away without issue, he then lost traction as he crossed the wet part of the circuit which allowed Tom Ingram to blast into the lead on the run to turn one from second on the grid.

Dan Lloyd got away well from fifth to move up into third spot on the opening lap but further back, there were issues for Sam Smelt and Gordon Shedden as they both went off track at Luffield and were forced to retire.

That would result in a yellow flag being put out and that resulted in the big talking point of the race when Butcher launched a move for the lead going into Brooklands on lap three with a yellow flag being shown on the side of the circuit as the Toyota made driver made his move.

From that point on, Butcher eased away at the front of the pack to cross the line first and secure the win on the road, with Ingram under pressure from Lloyd who put in a strong run in the Vauxhall to snare his first podium finish of the campaign.

Aiden Moffat, who had started from P3 on the grid, would cross the line fourth spot having managed to keep pace with Ingram and Lloyd throughout, with that three-car battle breaking away from the dice for fifth spot, which would run from start to finish.

Josh Cook would ultimately prevail as he held off Colin Turkington’s BMW, with Ash Sutton taking seventh spot. That was despite the fact he dropped a spot on lap one before battling his way back ahead of Stephen Jelley and Dan Rowbottom, with the Honda and BMW following behind.

Sutton would also score the fastest lap despite the additional ballast on his car.

Jake Hill would struggle throughout with the ballast on his Ford Focus and would fail to make it into the top 20 after a long battle with Jack Butel, Jack Goff and Tom Chilton.

The Hybrid car in the hands of Andrew Jordan held the fastest lap at one stage after starting from the pits. Jordan would cross the line in 25th.