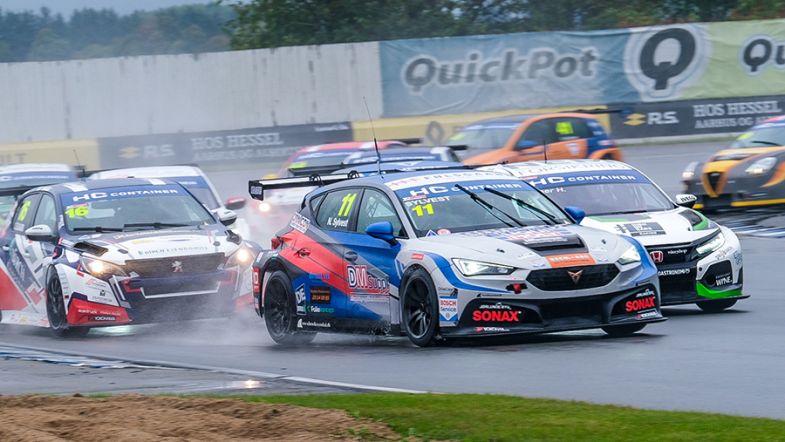 Nicolai Sylvest took two victories as the TCR Denmark series hit the track in wet conditions for the latest rounds of the 2022 season at Jyllandsringen.

The LM Racing driver took top honours in the first and third races of the weekend, with team-mate Jan Magnussen emerging victorious in race two as the Cupra pairing emerged as the drivers to beat in tricky on-track conditions.

From second on the grid alongside Kasper Jensen, Sylvest made a better start than the polesitter to hit the front despite the best efforts of Casper Elgaard to split the pair from the second row of the grid; the Peugeot driver instead slotting into third spot ahead of Magnussen.

Sylvest held off Jensen in the early stages before edging away at the front and he would ultimately head a 1-2 ahead of Magnussen, who got ahead of Elgaard when the Peugeot driver made a mistake and then managed to fight his way ahead of Jenson on the final lap.

The Honda driver would complete the podium in third, with Elgaard dropping out of the equation when he ran off into the gravel whilst defending from Kenn Bach and Michael Carlsen.

Race two kicked off with René Povlsen on pole in his VW, and he went wheel-to-wheel with Jacob Mathiassen and Philip Lindberg on the run to turn one, where Lindberg ended up spinning into the gravel.

Povlsen led from Mathiassen and Magnussen, who had rocketed up the order from ninth on the grid, with Magnussen then taking second when Mathiassen and Povlsen clashed – dropping the leader down to sixth spot.

Magnussen got ahead into the lead and remained out front to the end despite a late caution period caused by Mathiassen – who had already dropped back to fifth spot – going off at turn one.

Michael Markussen – who had been forced to sit out qualifying on Saturday – came through to second spot, with Jensen again taking third spot ahead of Sylvest.

Sylvest jumped ahead of Magnussen at the start of race three to take the lead but it would be a truncated affair, with an early safety car called when Philip Lindberg was knocked off into the gravel.

Shortly after the restart, Louise Frost then went off to bring the safety car straight back out with Sylvest eventually able to edge away from Magnussen when racing did get underway and Jensen completing the podium for the third time in the weekend.

That hat-trick of third place finishes mean Jensen retained the lead in the standings, 52 points clear of Markussen with Elgaard has slipped to third, seven further points adrift.

Sylvest and Magnussen are fourth and fifth with gaps of 60 and 62 points, leaving the top five still in contention for the title ahead of the season finale at Padborg Park later this month.