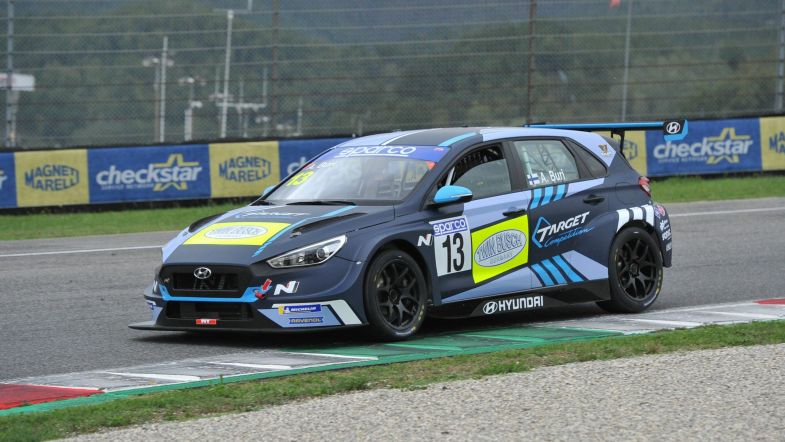 Target Comeptition’s Antti Buri struck late on to secure pole position for the opening TCR Italy race of the weekend at Mugello.

The Hyundai i30 N TCR driver posted a best time of 1:55.331 in the dying seconds to beat Aggressive Team’s Kevin Ceccon by just over two-tenths of a second to grab the top spot.

TCR Italy points leader Nicola Baldan will start fifth on the grid for Race 1, which will then become fourth for the partially reversed second race grid, for which Matteo Poloni claimed pole position.

BF Motorsport’s Eric Brigliadori was the early pacesetter in the session, setting a time of 1:57.746, initially just over half a second quicker than Ceccon’s Hyundai.

Ruben Volt then went third quickest as the track conditions began to improve.

A brief red flag halted proceedings temporarily, with Buri running second just behind Brigliadori’s Audi RS 3 LMS, but both were soon usurped by Ceccon upon resumption of the session.

Ceccon looked like he had the measure of Buri on the final runs, but a sterling lap from the Target driver put the Finn top. Ceccon tried to respond but lost too much time in the second sector, forcing the Italian to bail on his final attempt.

Behind Brigliadori, Volt was fourth ahead of Baldan, while MM Motorsport’s Marco Iannotta was sixth quickest in his Honda Civic Type-R.