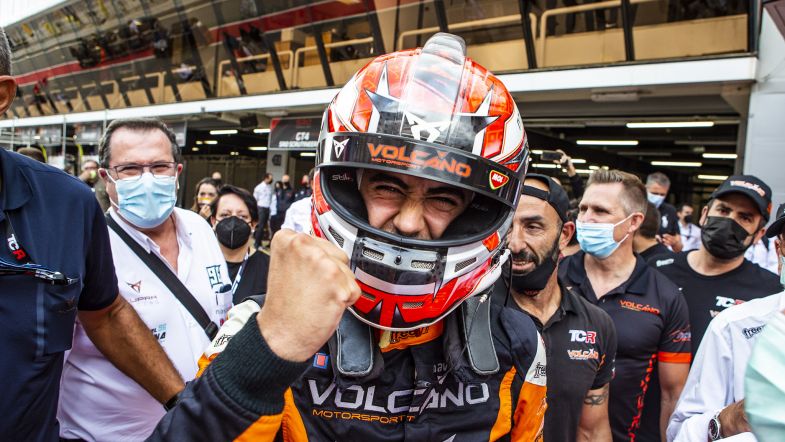 Volcano Motosport’s Mikel Azcona was beaming as he stepped out of his Cupra Leon Competición, with the Spaniard clinching his second TCR Europe crown at Barcelona after heading the field from lights to flag in Race 1.

“I’m super happy,” Azcona told TouringCarTimes. “It was a comfortable race although, at the beginning, Clairet pushed quite a bit.

“But I tried to not make any mistakes, to not go over the kerbs, to avoid causing technical failures and, in the end, we got a calm victory. It was quiet race, I was very calm, as I didn’t need to win, finishing in tenth place was enough for us, so I’m happy for that,” added the Spaniard.

Azcona is having busy weekend, having so far claimed the TCR Europe title, pole, Race 1 victory, and is starting from pole position in Race 2 of the WTCR weekend at Most.

“Now I have one less weight over my shoulders, as having the title showdown in this weekend where we have to combine both championships was stressing me a bit but, for now everything is perfect: pole position in the Czech Republic, pole position here, victory, the title,” said Azcona.

“With today’s result I feel satisfied, but tomorrow I will still fight with everything at Most and with one less weight over my shoulders.”

“We are very happy as we worked very hard all year,” Volcano Motorsport team principal Andrei Tkachenko told TouringCarTimes. “We had some problems with the car in the beginning of the season as it wasn’t always reliable, but we were able to solve the problems.”

“Mikel has been very strong this year and became the champion even missing one race weekend, he was perfect and the team is very happy to have a driver like this and be able to show that we can score very good results with all of our drivers,” added Tkachenko.

“Yes, we have pole position with Klim, but he’s still getting used to the car and normally a driver needs some time to get comfortable,” said Tkachenko.

“We didn’t do any testing with this car as we only bought it before the start of the season, so all of our races are tests and we hope that Klim can have a good position tomorrow.”