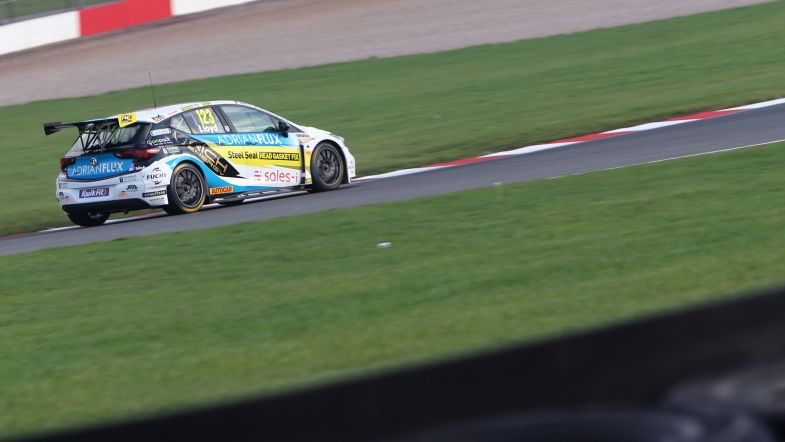 Power Maxed Racing pair Dan Lloyd and Jason Plato admitted they were thrilled with the pace of the Vauxhall Astra after both secured their best qualifying results of the season at Donington Park.

FP1 proved to be something of a challenge as neither driver was able to make it into the top ten, but improvements to the car for the second session saw Plato vault up to the top of the times with what had been the quickest lap of the weekend to that point.

Lloyd also showed stronger pace and it was the former TCR UK champion who would lead the team’s challenge in qualifying.

After both drivers made it through to Q2, Lloyd would end up securing a place on the front row of the grid, setting a best time that was just 0.033s down on Gordon Shedden’s Honda.

“We were nowhere in FP1 and in both practices we had issues, but we changed a lot ahead of qualifying,” he said. “We were P8 in the first part and then ended up on the front row, so the team have done a mega job.

“The shootout is what I’ve been used to with racing in Europe and I feel it adds more pressure as you only have a few laps to get the job done. I feel we still have positive changes to make for tomorrow, but we’re in good shape.”

Plato meanwhile would edge his way into Q2 in tenth spot, and then improved his pace in Q2 to secure third on the grid – his best qualifying result of the campaign by far.

“I’m pleased with that,” he said. “I thought people had wound things up a bit in Q1 when we were four tenths of a second off but we chipped away it and came away with a strong result.

“I remember the good old days of one lap qualifying so I like this format and when you only get a few laps to set a time, the pressure is on.

“I’m chuffed for the whole team today and I think our race pace will be okay. It would be good if we can get into the lead at the start and clear off as I’d benefit from the clear air but that will be difficult. However, it would be ace to win some races as that is what I’m here for.”