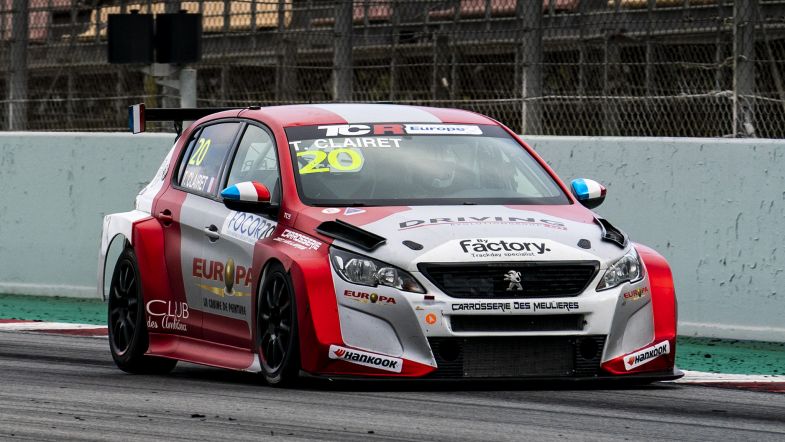 Teddy Clairet aiming for another podium finish at Barcelona

Peugeot 308TCR driver Teddy Clairet claimed his third podium of the season after finishing second in the first race of the Barcelona season finale weekend. And the Frenchman believing he can score another good result in the last race on Sunday.

“The start was ok and I was able to overtake Sami (Taoufik) at the start, which was a good point because I knew that Mikel (Azcona) was a bit faster, maybe not on one lap, but on ten laps he would be faster,” Clairet told TouringCarTimes.

“So I thought that he could bring me with him if I managed to be second on the first lap.”

The safety car was called into action after two separate incidents on lap one, neutralising the race for five laps, a difficult moment according to Clairet.

“Then there was the safety car, which was a tricky moment since it was very long,” added the Frenchman. “When you have five laps like that you can lose your concentration, but the restart was good.”

Taoufik attacked Clairet for second place, but Peugeot driver managed to defend: “Sami was behind me for two or three laps. I think we were on the same rhythm and, sometimes in TCR, when you are a couple of tenths up, you can’t really overtake somebody unless he makes a mistake.

“So knew he couldn’t overtake me at a braking point, so I kept concentrating myself to avoid making a mistake, then I managed to create a gap and stay ahead until the chequered flag,” added Clairet. “Mikel was then a bit faster, so it was impossible for me to fight for P1.”

Clairet has been at the top through all sessions at Barcelona so far and he’s not discarding finishing the season with another good result: “I will try to go for another podium result tomorrow, because it’s the last race of the season and I want to finish on a high.

“It’s the second race and sometimes it can be messy at the first corner, so I’ll try to be clever at that point and take it from then,” concluded Clairet.