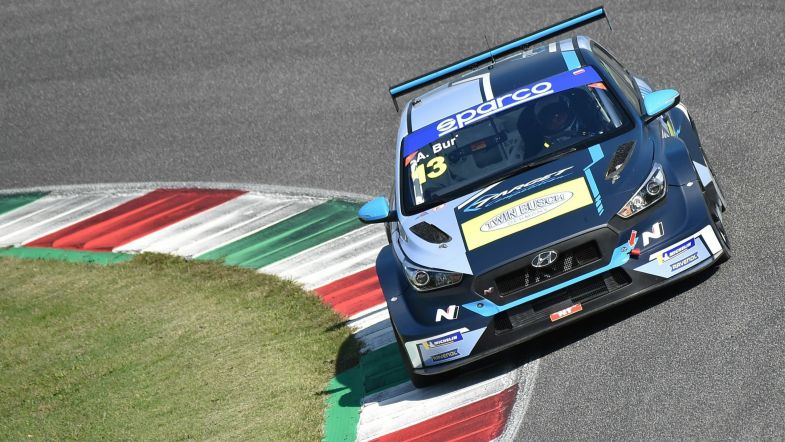 Target Competition’s Antti Buri clinched the TCR Italy title in the final race of the season at Mugello as Kevin Ceccon took victory for Aggressive Motorsport.

Leading the points standings coming into the race courtesy of winning the morning’s opening encounter, Buri started the reversed-grid second race from eighth on the grid, alongside Ceccon.

But the pair quickly worked their up the order on a dramatic opening lap which resulted in the retirement of Nicola Baldan and Eric Brigliadori following contact at Turn 1.

The incident was instigated after Marco Iannotta’s Honda Civic Type-R collided with Baldan’s Hyundai which in turn ricocheted off Brigliadori’s Audi, forcing two of the three into the barriers.

That brought out the safety car, after which polesitter Matteo Poloni led the early of the race from Michele Imberti.

Ceccon had moved up to third amid the melee on the first lap, with Ruben Volt and Buri in close tow.

While Target still had Buri in title contention, their Race 2 was soon unravelling even further as Fabio Antonello was also forced out with damage on the first racing lap after the restart, causing another safety car intervention.

Once the racing did get going properly, with 12 minutes remaining, Polomo dropped like a stone, first to Imberti who seized the lead at Turn 7 and then to Ceccon and Volt, with Buri eventually making it through as well.

Ceccon and Buri closed in on Imberti late on, with Ceccon’s move for the lead coming at Turn 1 with just over a minute remaining.

Buri then made his move on the final lap and, assured of the title, held onto second at the finish.

Off the podium, Salvatore Tavano came home fourth in his Girasole Cupra while Poloni was fifth ahead of Volt.

Sababtino di Mare and Riccardo Romagnoli rounded out the top 10.