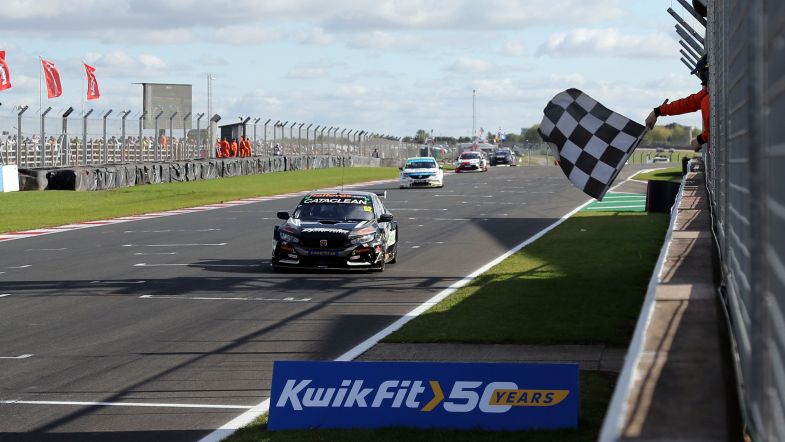 Gordon Shedden finally secured the first win of his BTCC return with victory in the opening race of the weekend at Donington Park.

The Scot had secured multiple podium finishes since re-signing with Team Dynamics but had been unable to make it onto the top step, although he gave himself the best possible opportunity after sticking his car on pole in qualifying.

Shedden made the ideal start to keep the lead into turn one despite the best efforts of Dan Lloyd, who made a strong start from second in the Power Maxed Vauxhall but couldn’t make a move for position.

Behind, Jason Plato from third on the grid was jumped by Rory Butcher going into the Old Hairpin, with Senna Proctor also clearing the former champion at Coppice to move into fourth.

Before Lloyd was able to try and make a move for the lead, the race went behind the safety car after an incident on lap three involving Jake Hill, Ollie Jackson and Adam Morgan at the Old Hairpin.

Dicing for eleventh place, Jackson launched his Focus down the inside of Morgan’s BMW going into the corner and then drifted wide on the exit, with Morgan trying to cut back to the inside just as Hill tried to sneak up the inside of the BMW.

Three into one wouldn’t go, resulting in Morgan being tapped into a spin by Hill, with the BMW going off backwards into the tyres and Hill taking a trip across the gravel that would result in him needing to make an unscheduled pit stop.

With the BMW recovered, the action kicked off again on lap seven and Shedden was able to control the race from the front as he gradually edged away from Lloyd to ensure he was never at risk of being overhauled for the win.

Lloyd would give his all to try and keep with the Honda driver but had to settle for second spot, with Butcher following him home in third spot as the leading positions remained unchanged right through to the finish.

Proctor would also finish in the same position he had held after lap one in the BTC Racing Honda, with fifth going to Turkington’s BMW.

The Northern Irishman had come under pressure from Dan Rowbottom on the restart before the Honda man was forced wide by Josh Cook at McLeans and dropped down the order, with Turkington chasing down Plato before getting ahead on the exit of Coppice on lap twelve.

Plato had to therefore settle for sixth place ahead of Ash Sutton, who took advantage of the move involving Cook and Rowbottom to nip ahead of the pair into seventh with Cook following him home.

Chris Smiley and Ollie Jackson rounded out the top ten, with Tom Ingram in eleventh – meaning he will now run ballast free for race two in the Hyundai.

Rowbottom would end up in 14th after his trip across the gravel, with Hill unable to score after his stop despite battling his way through to 17th.