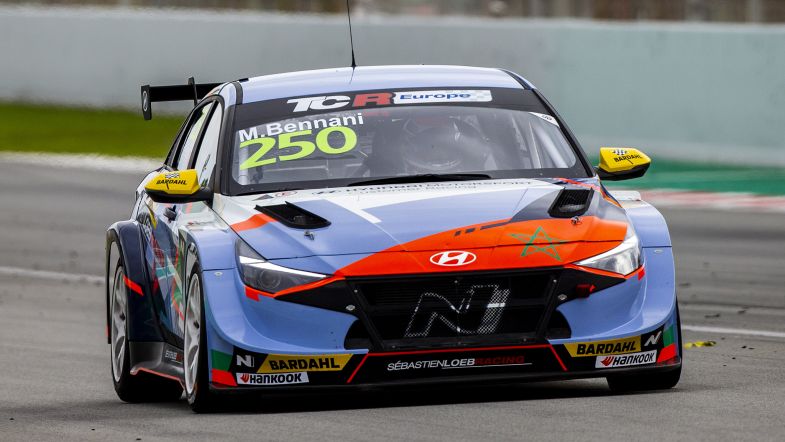 Mehdi Bennani: “Maybe I will do some electric racing next year”

Sébastien Loeb Racing driver Mehdi Bennani fought hard in the last race of the TCR Europe season at Barcelona to finish in third. The Moroccan has several options for 2022, including a possible ETCR programme.

Bennani started from fourth place on the grid, quickly settling behind Brutal Fish’s Isidro Callejas, with whom he would fight until the chequered flag.

“It was a very intense race,” Bennani told TouringCarTimes.

“I wanted to fight for the win, but Callejas (Brutal Fish) was there. I was faster than him, but he was a big fighter and didn’t give me space to overtake.

“Still, I’m very happy with the comeback and to have finished on the podium and with two Moroccans together with P3 and Sami in P4. This was my target when the championship started, so I’m very happy,” added the Sébastien Loeb Racing driver.

Bennani also came under fire from his team-mate Sami Taoufik in the middle part of the race: “We know each other very well and it was not a problem, and I knew that if I found a way to overtake Callejas, Sami would have followed.

“But I have to congratulate Callejas because he’s a big fighter and I think he has a great future in touring car racing,” added the Moroccan.

This year Bennani has competed with the new Hyundai Elantra N TCR, which he believes is a step ahead: “The car has a good base and we did good work. We struggled a bit to understand the tyres and, until now, I didn’t understand them compared to the Yokohamas.

“I did prefer the Yokohamas to the Hankook because the Yokohama is more of a racing tyre, like you have only one lap to get qualifying, whilst in the race you could destroy your tyres,” Bennani explained. “Here you don’t get the feeling you are with racing tyres because on lap one, two, three you can do similar lap times.

“So for me it’s not a behaviour easy to understand, since I have raced at the top level for 20 years and I was used to the way the Yokohamas worked, and until now, until the last race of the championship, I didn’t understand the way the Hankooks worked.”

“I don’t know what I will be doing next year and I have some proposals around,” Bennani said.

“We will see, the electric programme called me to do some things together and it’s something I have to see, if we can do some electric racing next year.”