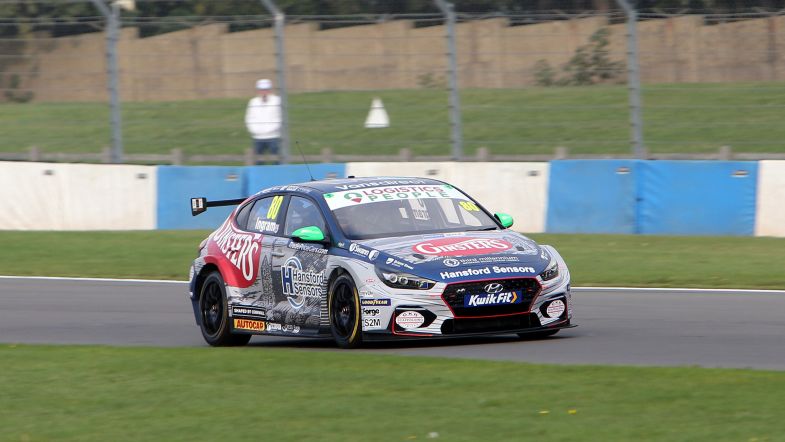 Tom Ingram produced a stunning drive from eleventh on the grid to secure victory in the second BTCC race of the weekend to keep his hopes of the 2021 title alive.

The race had started with Gordon Shedden on pole after his victory in race one, but it was Rory Butcher who jumped into the lead from third place – getting ahead of Dan Lloyd into Redgate and then sneaking ahead of Shedden going down the Craner Curves.

Behind however, it was Ingram who was the man on a move and as the field swept through Coppice for the first time, the Hyundai was already up into the top six.

Shedden reclaimed the lead from Butcher on lap two through the Old Hairpin whilst Ingram’s charge continued as he nipped ahead of Colin Turkington and then dived past Senna Proctor into the chicane to grab fourth.

A lap later, it was third placed Lloyd who fell prey to Ingram on the exit of McLeans and then on lap five, he grabbed second from Butcher at Redgate.

Chasing down Shedden ahead, Ingram drew alongside the Honda on the exit of Coppice on lap ten and was ahead by the time the pair got to the final chicane.

Although Shedden would remain close behind, Ingram’s win was never in doubt as he secured a crucial win in the title race.

Outside the top two, there was plenty of drama in the fight fir third, with Butcher finding himself under pressure from Turkington in the closing stages; the BMW driver have worked his way ahead of Proctor and Lloyd into fourth.

However, just three laps from home, Turkington took a bit too much kerb going into the Old Hairpin and suffered a spin that would drop him down outside the top ten.

It also resulted in the pack behind being shuffled as they looked to avoid the BMW on the exit of the corner, with points leader Ash Sutton able to nip ahead of both Proctor and Lloyd to suddenly find himself running in fourth spot.

The Laser Tools Racing man had struggled for pace in the early stages and slipped to the lower reached of the top ten, but recovered back through to grab vital points that allow him to retain a 33 point advantage over Ingram in the standings going into race three.

Lloyd and Proctor took fifth and sixth ahead of Josh Cook and Aiden Mioffat, with Jake Hill battling his way up onto the top ten in the Focus after his tricky opening encounter.

Dan Rowbottom took tenth spot with Turkington crossing the line in eleventh, although he will start race three from pole thanks to the reverse grid draw – with a strong result needed to keep his own title bid on track.