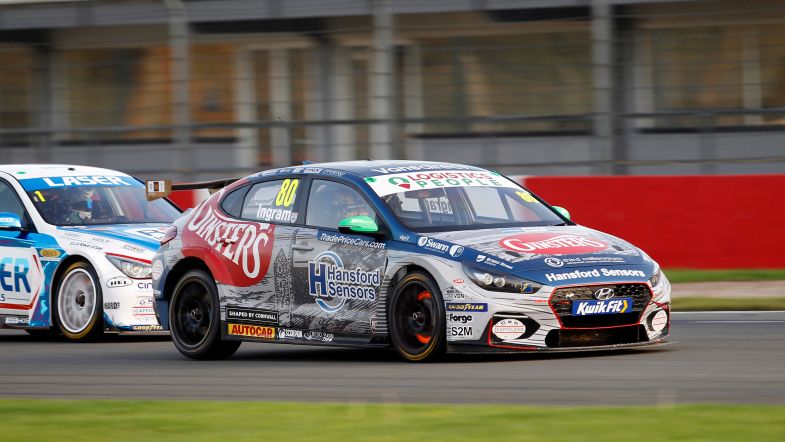 Tom Ingram: “There’s an air of inevitability about it now”

Tom Ingram has admitted there is an ‘air of inevitability’ about the race to secure the BTCC title after Ash Sutton was able to retain a handy advantage in the points standings at Donington Park.

Although unable to score a top three finish in the Infiniti, Sutton retains a 32 point lead in the standings going into the season finale, with Colin Turkington now holding second spot and Ingram sitting third.

The EXCELR8 driver saw his hopes impacted by the success ballast he had to carry into the Donington meeting, which left him outside the top ten on the grid for race one – where he battled hard to eleventh place.

Race two however saw Ingram on a charge when the weight was removed from his i30 Fastback N – charging up five spots on lap one and then working his way up to second behind Gordon Shedden.

Ingram battled ahead of the Scot at Coppice to grab the win but was then handed a penalty for contact with the Honda that dropped him back to second spot in the results.

Carrying maximum ballast into race three, he would get ahead of Sutton at the start but was unable to keep the Infiniti behind as he crossed the line in tenth spot.

Ingram will once again be a contender for the title going into the season finale but with a 38 point gap to Sutton, he admitted that the title would be tough.

“I’m not one to defeatist, but there feels like an inevitability about the situation now,” he said. “We’re not going to catch Ash unless something goes wrong for him, and I think the big battle is on who will finish as best of the rest.

“I feel a bit downbeat about the Donington weekend but I know I shouldn’t as what we have seen once again is the impact that the weight has. We can’t carry the weight as well as the rear-wheel drive cars can, as Ash set the fastest lap with full weight in race one and we couldn’t get into the top ten with less ballast.

“When the weight came out for race two, the car was outrageous and the best it has ever been. After a good start, I worked my way forwards and it was a shame to lose the win for a something I don’t feel was correct in the slightest.

“I hated to be ‘that’ driver in race three trying to back Ash up into some chaos but I had no option with the weight on the car and we got what we could from it. We’ll take coming through from eleventh as the highlight of the weekend and now look to try and finish on a high when we get to Brands Hatch.

“We can only do our best see what happens.”