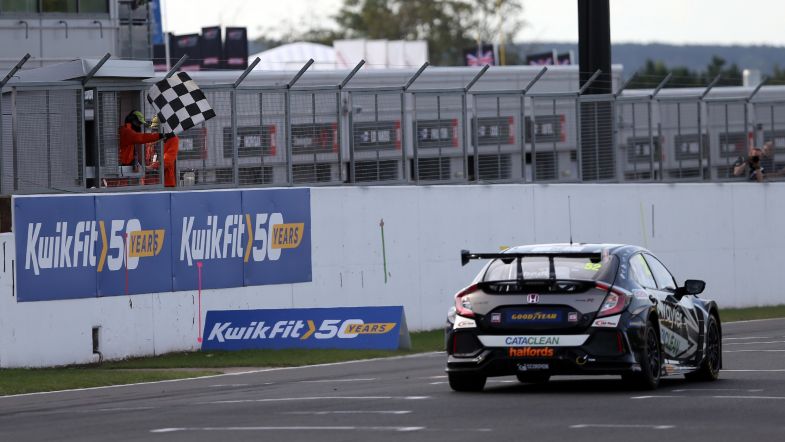 Gordon Shedden admitted he was delighted to return to the top step of the BTCC podium after a double win at Donington Park saw him reach a half century of victories.

The Scot produced a storming lap in qualifying to break the lap record and secure pole position, and he made the most of his position at the head of the pack to control the opening race from the front.

That marked the first victory of Shedden’s BTCC return and the second followed soon after, albeit in less straightforward circumstances.

Reclaiming a lead he had lost to Rory Butcher at the start, Shedden remained out front despite running maximum ballast until Tom Ingram got ahead at Coppice.

The EXCELR8 driver crossed the line first but would then be hit with a penalty for contact whilst getting ahead, promoting Shedden back up into first and handing him a 50th career win.

With maximum ballast onboard and P11 being drawn for the reverse grid, Shedden faced an uphill challenge to try and fight for the top ten in race three and would end the weekend with 13th spot.

“I’ve had a great car under me all weekend and it has just felt completely hooked up!” he said. “Shootout qualifying is always tricky for the front wheel drive cars as we only really have one lap to do a time, but I managed to put in one of the best laps of my career and bingo I’ve broken the lap record.

“The first race went to plan for me, and I managed to control the gap to the cars behind. The second race was a bit trickier with the weight on, and I had Rory and Tom buzzing around behind me. I feel sorry for Tom, but it was a push to pass move and that unfortunately is no longer allowed.

“Race three I was just caught up in the usual last day at school melee and struggled to make progress. But I’m chuffed with that weekend overall, awesome results and I can’t wait to get to Brands in two weeks’ time! ”