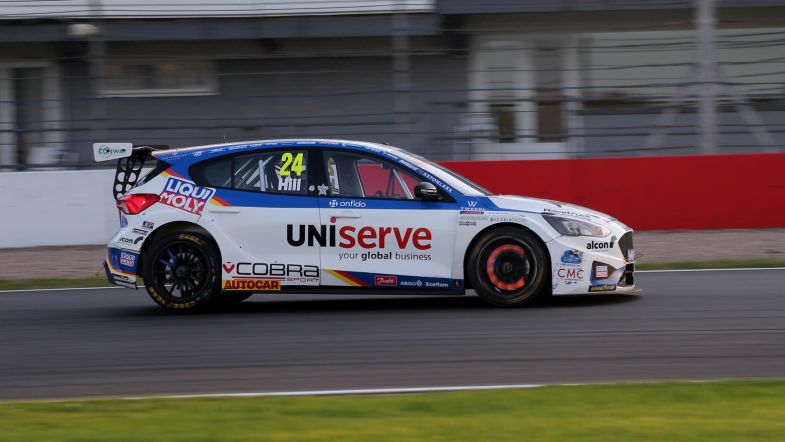 Jake Hill: “It’s nice to be there at the end”

Jake Hill said it was nice to be one of the five remaining contenders for the BTCC title after a ninth podium of the season saw him retain a slim hope of a maiden championship.

The MB Motorsport driver will go into the finale 45 points behind Ash Sutton with 67 still available having fought back well from a tricky qualifying session where he failed to make it into the top ten in his ballast heavy Ford Focus.

A clash with Adam Morgan in race one that resulted in the need to make an unscheduled stop meant race day started with a 17th place finish, with the team then forced to fit a new clutch before race two.

Ninth place there resulted in a third place grid slot for the reverse grid finale and Hill battled his way ahead of Dan Rowbottom’s Honda to pick up a second place finish that leaves him holding fourth place in the standings going to Brands Hatch.

It will be the first time in his BTCC career that Hill has reached Finals Day as one of those in with a mathematical chance of the crown.

“The important thing that we’re there at the end, and the gap isn’t quite as big as I expected,” he said. “There is still a chance of it playing into our hands but we have to be realistic about the possibility of catching Ash, and I think that if we were able to finish second then it would be a result we could be very proud of.

“I’ve always known that I can be a contender, and it’s just a case of getting the right car under you. The Focus has been good this year, and we’ve been able to get the job done most of the time. I have nothing to lose when we go to Brands Hatch so from me, it will be a case of full attack.

“Brands Hatch GP is my home track and I know it like the back of my hand, so bring it on.”