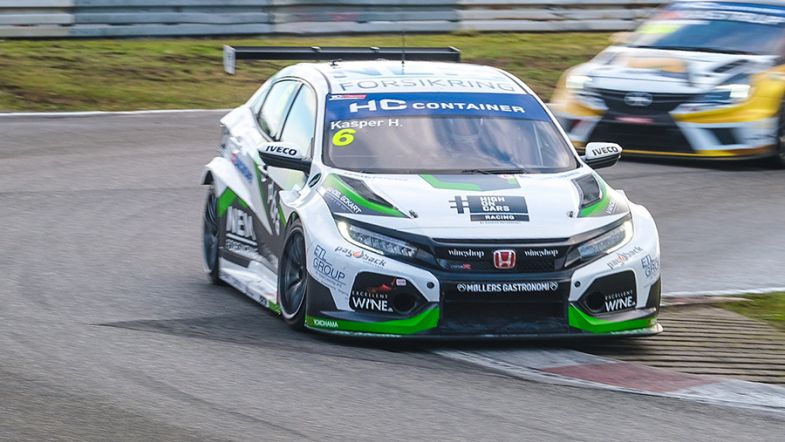 Reigning champion Kasper H. Jensen will start the opening race of the TCR Denmark finale from pole position after setting the pace in qualifying at Padborg Park.

Jensen set the pace in both Q1 and Q2 at the wheel of his Massive Motorsport-run Honda Civic Type R to beat former F1 racer Jan Magnussen to pole by nearly fourth tenths of a second.

Michael Markussen, who currently sits second to Jensen in the standings, was third fastest alongside Nicolai Sylvest’s Cupra – leaving four of the title contenders sharing the front two rows of the grid.

The fifth however will face a challenge to keep his title hopes alive, with Casper Elgaard’s Peugeot consigned to the back of the grid after receiving external aid following an off into the gravel in Q1.

After that trip off track, it was Sylvest who posted the first competitive lap of 1:01.306 but that was soon bettered by Jensen’s 1:00.893 – which would remain the benchmark time in the opening part of the session.

Jensen was then quickest with his first lap of Q2 on a 1:01.046 before Magnussen improved, but Jensen responded immediately with a 1:00.359 that nobody was able to beat.

Magnussen did his best but had to settle for second despite improving his time, with Markussen moving up into third spot just before Jensen went quicker still to cement his position at the head of the field.

The first race is scheduled to get underway on Sunday at 10:05 CEST.