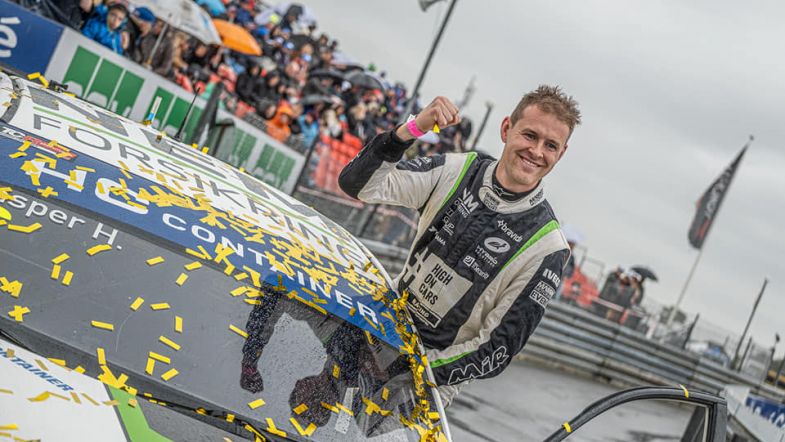 The Massive Motorsport driver started from pole in the first race but was beaten into Turn 1 by LM Racing driver Jan Magnussen.

The safety car was issued at the end of the race, leaving just two laps left of the race when it headed back in.

Cupra driver Sylvest managed to pass Jensen for second place on the penultimate lap, only for the Honda driver to retake the position.

The fight for the win went right down to the line, with Magnussen out dragging Jensen to claim his eighth win of the season.

Second place was however enough for Jensen to seal his second title.

Sylvest crossed the line in third but was dropped to 12th following a post-race penalty for overtaking under yellow flags.

Disaster struck Jensen in the second race as his bonnet came loose on the formation lap, forcing him to pit and start the race from the pit lane.

The Insight Racing duo of Jacob Mathiassen and Philip Lindberg started from the reversed grid front row but were quickly reeled in by Markussen.

The Peugeot driver started eighth but quickly made his way up through the field to claim the lead on lap six.

Markussen won the race ahead of LM Racing team-mates Magnussen and Sylvest while Jensen recovered to finish sixth.

The final race had Markussen starting from pole position, claiming the lead into Turn 1 ahead of Cupra driver Magnussen.

The safety car called out on track as William Nyberg was turned around by Lars Højris in the first corner.

Magnussen found himself under pressure from Jensen as the race resumed, with the Honda driver making the move for second shortly after the restart.

Jensen then closed in on Markussen, making the move for the lead on lap 11.

Massive Motorsport’s Jensen won the race by 4.5 seconds ahead of Markussen while Magnussen claimed the final podium spot.

Jensen claimed the title on 371 points as Markussen clinched the runner-up spot on 325 points and Magnussen was third on 309 points.