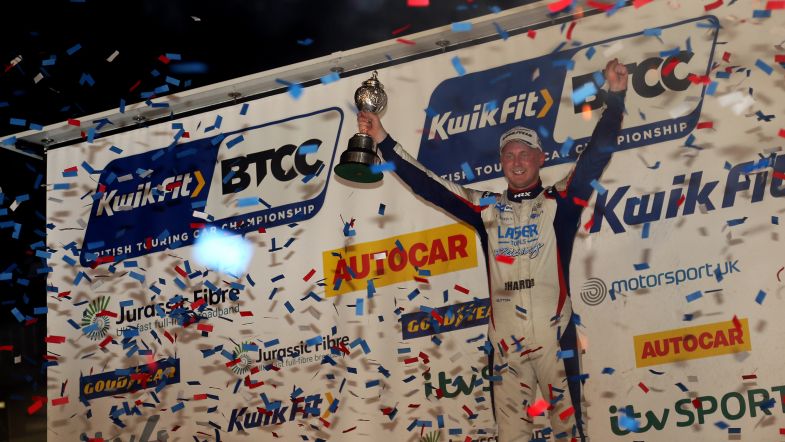 Ash Sutton ‘over the moon’ with third BTCC title

Ash Sutton admitted he was ‘over the moon’ after successfully wrapping up a third British Touring Car Championship title at Brands Hatch.

The Laser Tools Racing driver headed into the season finale as the hot favourite to secure the title having established a handy lead at the head of the standings, and he was able to extend his advantage when he finished ahead of closest rival Colin Turkington in race one.

Although Turkington nipped ahead when the second race kicked off, a sixth place finish there was enough to put Sutton out of reach as he secured a third championship title in just six seasons.

With the title secured, Sutton rounded out the campaign with a fine victory in race three to end the campaign 51 clear of Colin Turkington in the standings.

Sutton also picked up the Independents title for the second time.

“Everyone has been putting pressure on me by saying I nearly had it wrapped up, but I’ve always been the one to play it down as it wasn’t over until we crossed the line and couldn’t be caught,” he said. “It happened a race early which is great as it meant I could relax and be myself for the final race, and I’m over the moon.

“This title is probably the opposite to how we won the other two, and we did it in the dry rather than in the wet. Rather than being the hunter, we have been the prey with the others trying to catch us, but the car has been phenomenal and I was able to do what I needed to do, be the shadow and just drive within myself.

“Oulton Park for us was a bit of a low but if you put that to one side, it’s been a great year for us. We’ve led the way since round two which is a stat in itself as it means we have carried maximum ballast into race weekends for much of the year, but we have overcome it.”