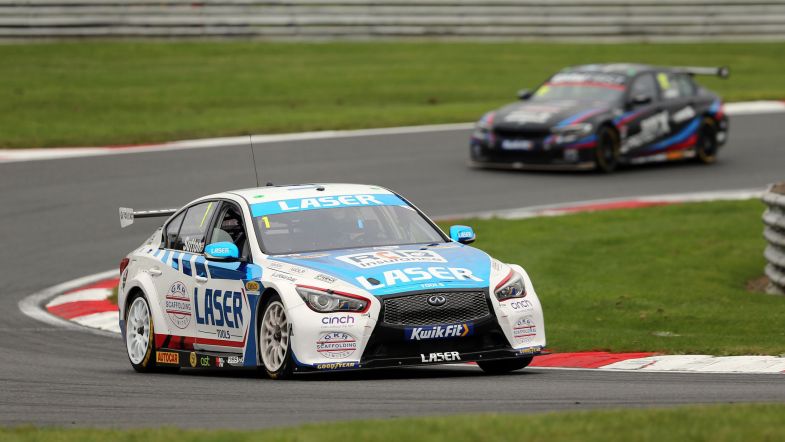 Josh Cook made it two wins from two in the second race of the weekend at Brands Hatch, with a top six finish being good enough to give Ash Sutton the 2021 BTCC title.

Cook started the race from pole after his victory in race one and held the lead at the start, with team-mate Senna Proctor seeing his chance of fighting for victory end on the opening lap when he slid off into the gravel at Druids.

Sutton had got away well off the line but found himself baulked as the two cars ahead closed the door, which allowed Colin Turkington’s BMW to nip ahead going through Paddock Hill Bend.

The safety car would then be deployed after Ollie Jackson was tipped into a spin at Surtees before being collected by Tom Oliphant and Adam Morgan – putting all three cars out on the spot.

Cook led behind the safety car ahead of Dan Lloyd’s Vauxhall, which had hung on round the outside of Gordon Shedden through the early corners to grab second spot, with Dan Rowbottom fourth ahead of Turkington and Sutton.

The top three broke away from the chasing pack on the restart with Sutton edging away from the squabble behind him as he looked to secure the points needed to take the title.

That squabble saw Rory Butcher slide ahead of Aiden Moffat going into Druids on lap seven before Moffat then suffered a spin going into Graham Hill Bend – tagging Chris Smiley’s Hyundai and putting the Northern Irishman out of the race. Moffat would also be forced to pit and dropped off the lead lap.

When Rowbottom ran wide at Paddock Hill Bend on lap eleven, Turkington nipped through into fourth but that still left Sutton on course for the crown before another safety car called to recover the Cupra of Nic Hamilton from the gravel at Westfield.

The final laps when the action resumed would pass without drama however as Cook took the win from Lloyd and Shedden, with sixth spot for Sutton being good enough to give him the title.

Sutton also secured the Independents’ title at the same time with his only remaining rival – Tom Ingram – only able to finish back in twelfth having been forced off track on the opening lap whilst avoiding the Jackson incident.

The final race will see Stephen Jelley starting from pole after the top nine on the grid were reversed.