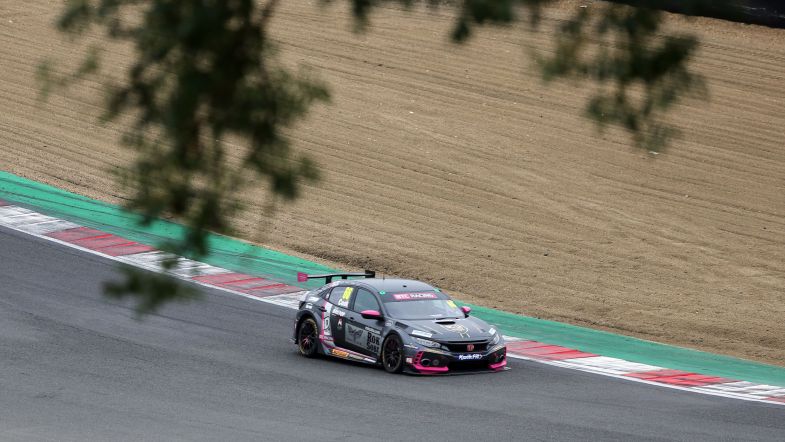 Josh Cook took victory in the opening race of the BTCC finale at Brands Hatch as the championship fight was cut down from five drivers to two.

In what would prove to be a relatively quiet race, Cook was able to jump ahead of team-mate Senna Proctor off the line, with the BTC Racing pair quickly pulling a gap over the chasing pack behind.

Even though the safety car would then back up the field when Andy Neate went off at Druids on the fifth lap, the duo once again edged clear of third-placed Gordon Shedden after the restart and ran unchallenged to the finish as Cook made it four wins for the campaign – although it wasn’t enough to keep his slim title hopes alive.

Shedden completed an all-Honda podium in third place with Dan Lloyd getting fourth in the PMR Vauxhall, having fought his way ahead of Dan Rowbottom on the second lap.

Rowbottom would take the flag in fifth spot ahead of Ash Sutton, who extended his lead in the standings in the process.

Sutton had got away well at the start to briefly pull alongside Lloyd going into turn one and almost found himself run off track at Graham Hill Bend before settling into sixth. Colin Turkington, who jumped up to seventh off the line, would keep the Infiniti honest in the early stages but was unable to keep pace after the restart.

That allowed Sutton to extend his advantage out to 33 with 44 still to play for in race two.

Behind them, Aiden Moffat and Tom Chilton followed behind, with the top ten being completed by Ollie Jackson’s Ford Focus.

Stephen Jelley had held the place early on but would plummet down the order late on, with Jackson being the cork in the bottle ahead of a train of cars that included both Jake Hill and Tom Ingram.

The pair would end the race twelfth and 13th which meant they joined Cook in dropping out of the title fight, although Ingram can still take the Independents’ title – although he will need to overturn a 36 point deficit to Sutton with 40 available.