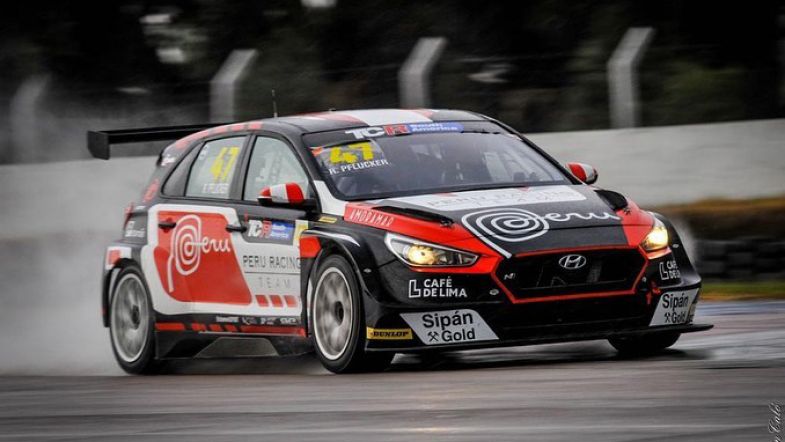 The safety car was called into action for one lap, with Marques in the lead ahead of Ernesto Bessone (Lynk & Co. 03 TCR) as the race restarted.

Rodrigo Baptista, driving an Audi RS 3 LMS, was third at the restart, but lost a position soon after to Race 1 winner Ever Franetovich of PMO Motorsport.

Cobra Racing Team driver Rodrigo Baptista received a black flag for one of the collisions at the start. Bessone attacked Marques for the lead on lap four, with Franetovich and Rodrigo Pflucker (Hyundai i30 N TCR) closing the gap.

PMO Motorsport driver Bessone came side-by-side with Marques at Turn 1, with his team-mate and Pflucker bumping into the duo.

This allowed Hyundai driver Pflucker to take the lead ahead of Franetovich. Bessone climbed up to third place as Marques had a puncture on lap five, with Oriola recovering ground in fourth place.

Rain increased in strength with four laps to go, with Pflucker opening a two-second gap over Franetovich. The Peruvian driver continued at the front of the field to claim his maiden victory, with Franetovich and Bessone completing the podium, just ahead of points leader Oriola who finished fourth.

Facundo Marques changed tyres and returned to the track to finish in eighth place. Block and Rodrigo Baptista completed the top ten.

“It was a very good race, with a lot of competition,” said Pflucker after the race. “There were a lot of incidents at the start that we managed to avoid. The racing was good and now we are set for the rest of the season.”

Oriola heads the standings on 188 points, 10 ahead of Brazilian driver Baptista.

The next round of TCR South America is scheduled for the 13th-14th of November at Buenos Aires.