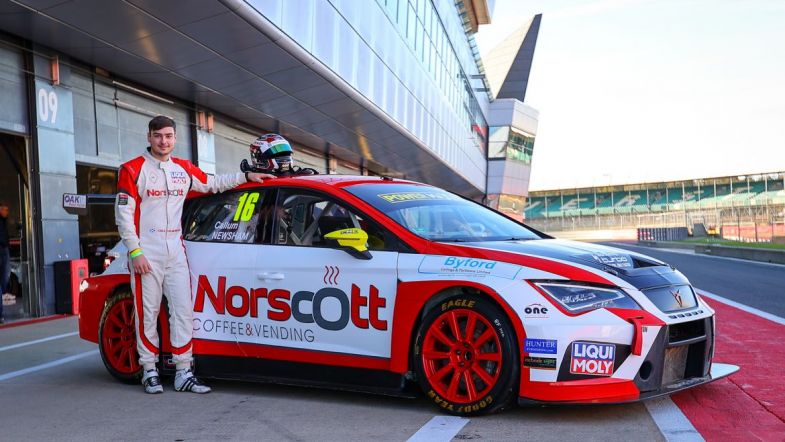 Callum Newsham, the son of former BTCC race winner Dave, has announced a move into TCR UK for the 2022 season.

Newsham makes the move having spent recent seasons competing in the MINI CHALLENGE and will compete in a Cupra TCR being run by Power Maxed Racing.

News of the announcement came on the first day of the MotorSportDays LIVE event at Silverstone, where Newsham is sampling the ex-Andy Wilmot car for the first time.

“I’m super-excited to get my 2022 TCR UK season underway,” he said. “The word is it’s shaping to be a very competitive championship next year and I’m looking forward to it.

“My experience in the MINI CHALLENGE will definitely help me get up to speed quickly. I must admit that I’m aiming for podiums from the get-go.

“We will be teaming up with Power Maxed Racing, which will be very nostalgic for me as my Dad raced with them in the BTCC in 2015/16. They are a very successful team and with them around us, everything points to a successful season.”

Dave Newsham admitted that TCR UK was a logical next step for his son after his time in the MINI.

“The time is right to move to another formula to continue his development,” he said. “I’ve been keeping my eye on TCR UK and the series is really gathering pace, so we’ve taken the plunge and purchased a Cupra TCR.

“I didn’t have to look far for a team to run the car, Power Maxed Racing are there already and I’m delighted to confirm we’ll be joining them for the 2022 season. I didn’t talk to any other team, it had to be PMR and I really could not wish for better to look after Callum. I have fond memories of my time with them; they run a fabulous operation and have become friends.

“The aim for next year? I think Callum is capable of podiums, for sure. He has proved to be quick when everything is working for him and he’s a clean and respected driver. I also believe the TCR car will suit his driving style. We are going to be with TCR UK for the foreseeable future – so let’s see if we can win this thing!”