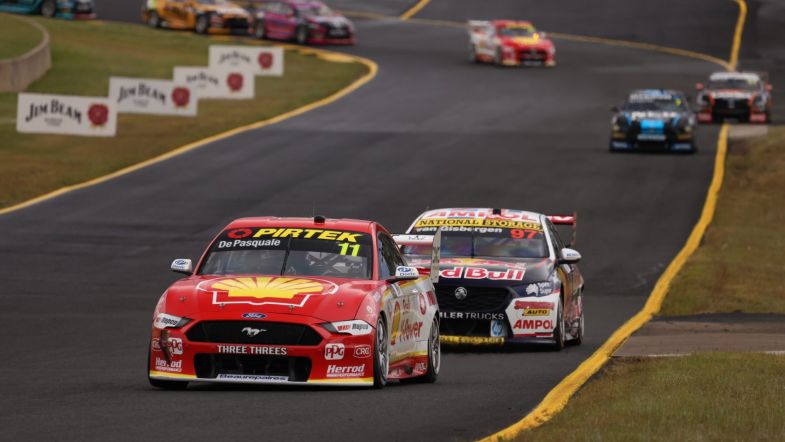 Anton De Pasquale produced a fine drive in the second race of the weekend in Sydney to convert pole position into his fourth win of the Supercar season.

After the rain that affected qualifying, conditions had improved enough for the field to head for the grid on slicks, with De Pasquale going with the soft compound tyre, but Shane van Gisbergen electing to run the hard.

Van Gisbergen got the best start to lead into turn one with Bryce Fullwood jumping up to second ahead of De Pasquale as the poleman briefly bogged down, but he then fought back into turn two – sneaking back ahead of the WAU driver after contact with the rear of the Commodore.

Andre Heimgartner and James Courtney both then cleared Fullwood before the end of the opening lap, with Will Davison rounding out the top six.

Van Gisbergen’s lead wouldn’t last for long as De Pasquale made the most of the soft tyre to slide down the inside at turn eight on lap two to grab the lead, with team-mate Davison also making up ground as he took fifth from Fullwood – who would continue to drop down the order, potentially as a result of damage from the opening lap.

Jamie Whincup had also lost ground through the opening stages of the race to run outside the top ten, with Cam Waters the big winner as he recovered from his off in qualifying to quickly move up to tenth.

At the front, De Pasquale quickly started to build a lead over van Gisbergen and his advantage had grown to 3.6s by the end of the sixth lap – with the points leader the only driver inside the top dozen to be on the hard tyre.

Team-mate Whincup was one of the early stoppers as he came in on lap seven from 16th spot to swap to the soft tyre in a bid to try and get out of traffic, whilst van Gisbergen found himself being chased down by Heimgartner’s Mustang, with Courtney, Davison and Scott Pye rounding out the top six by the end of lap ten.

Of the other hard-shod runners, Chaz Mostert was back in 13th spot having lost ground from his second row start, but pitted at the end of lap twelve to go to the soft tyre.

De Pasquale’s lead had grown to more than seven seconds when van Gisbergen elected to dive in on lap 13 from second place to make the switch to the soft rubber, rejoining ahead of Fullwood and Jack Le Brocq as the leading driver to have made their mandatory stop.

Mostert and Mark Winterbottom showed the pace of the soft tyre as they posted the first sub 1:32s laps of the race back down the order whilst van Gisbergen also set his fastest lap of the race as he looked to gain ground on De Pasquale before the leader dived in for his stop.

That happened at the end of lap 23 but when the Mustang rejoined the circuit, van Gisbergen was barely two seconds behind, with Courtney ten seconds behind in third having jumped ahead of Heimgartner as he was the loser in the stops to slip back to seventh.

Even on the so-called slower tyre, De Pasquale started to edge away from van Gisbergen but the threat of rain was growing as the laps ticked down towards the finish.

As teams watched the skies, the showers would hold off long enough for De Pasquale to take the flag for victory – making it three wins in five starts across the last two weekends.

Van Gisbergen took second spot to strengthen his championship lead, helped by the fact that team-mate Whincup could only finish 25th having been forced to make an unscheduled second stop due to a cut tyre.

Courtney rounded out the podium in third spot for Tickford from Davison, Pye and Brown, with a huge fight for seventh over the final laps seeing Heimgartner take the flag ahead of Mostert.

Heimgartner was warned for the way in which he defended the position however, with Mostert far from impressed on the radio with the way in which the Kelly Grove Racing Mustang was trying to retain the spot.

Percat and Mark Winterbottom rounded out the top ten with one race still to come under lights to conclude the weekend’s action.