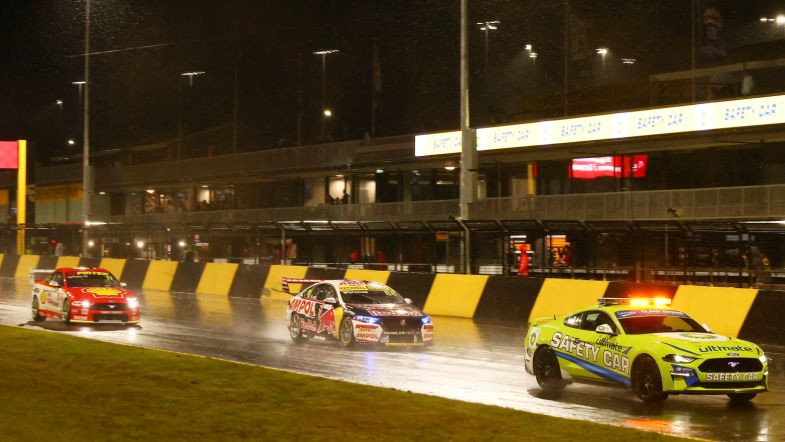 Jamie Whincup secured victory in a dramatic final race of the weekend in Sydney which would be red-flagged amidst heavy rain – ending a winless run going back 18 races.

Drama was twofold before the start of the race, with Chaz Mostert sent from the front row of the grid to the back after the front bar on his WAU Holden Commodore was found to have been too wide following qualifying, and rain starting to fall as the cars headed to the grid.

That meant the entire field would switch onto wet tyres for the start, with race one winner Shane van Gisbergen now joined on the front row by race two winner Anton De Pasquale.

When the lights went out, Bryce Fullwood jumped the start to rocket into the lead into turn one but Whincup did get away well from row three to go around the outside of the front two row to grab second spot before nipping ahead of Fullwood at turn two.

De Pasquale meanwhile got up to third on the road ahead of van Gisbergen, with Will Davison and Nick Percat following behind but the safety car was the deployed after James Courtney and Brodie Kostecki clashed and went off into the tyres at turn three whilst jostling in the pack.

The race continued behind the safety car as the two cars were recovered, with rain continuing to fall and circuit conditions worsening before the action was finally able to resume on lap seven.

Whincup led the field away ahead of Fullwood but De Pasquale came under immediate pressure from van Gisbergen, who edged ahead on the run to turn one but then sailed straight off across the gravel and plummeted to the back of the field.

That promoted Davison up into fourth, with Will Brown nipping ahead of Percat to run fifth – having started back in 17th. Moster meanwhile was also on a charge from the back as he moved to the fringes of the top ten.

With Whincup having better visibility, the seven-time champion quickly started to build a gap at the front as news came through of a pit lane penalty for Fullwood for his start, which he took at the end of lap eight to drop out of contention.

Fullwood’s penalty put De Pasquale up into second and he immediately set the fastest lap of the race to start closing the gap to Whincup at the front but the Triple Eight man then responded on the following lap to open the lead back up to more than three seconds.

Mostert’s astonishing charge saw him charge up into the top ten before pitting for his mandatory stop to give him clear air as he looked to strengthen his position on track, with the leading runners remaining on track; Whincup’s advantage extending to nearly five seconds by the end of lap twelve.

Van Gisbergen had worked his way up to twelfth before being handed a pit lane penalty for overtaking De Pasquale before the line on the restart, with the points leader claiming his rival had slowed before the line – although that didn’t appear to be backed up by onboard footage from the DJR car.

However, a technical check saw the penalty withdrawn, allowing van Gisbergen to continue on his way before pitting for his mandatory stop at the end of lap 16, where he almost departed with a wheelgun still attached to the right rear. That would then trigger another pit lane penalty, which this time would need to be served.

Davison and Brown were the first of the front-runners to come in for their stops at the end of lap 18 and despite changing all four tyres, Davison was able to stay ahead on the exit of the pits.

However, Brown pounced as the pair went through turn two to get ahead – although Slade and Mostert would quickly jump the duo having stopped earlier.

De Pasquale pitted a lap later from second spot and emerged as the leading driver to have stopped, with Mostert clearing Slade to run second amongst the stoppers just before an off for Jake Kostecki saw the safety car called out for a second time.

Whincup immediately dived in from the lead and took up position behind the safety car ahead of De Pasquale, with Mostert now running in an astonishing third place ahead of Nick Percat, who fought ahead of Slade into fourth, with Brown now sitting in P6.

With Kostecki’s car recovered, the action was set to resume but the decision was then taken to bring out the red flag to suspend the race due to the conditions, with the decision taken not to restart.

It meant Whincup took the win to regain the ground lost to van Gisbergen in race one, with his penalty meaning he would end up back in 23rd.