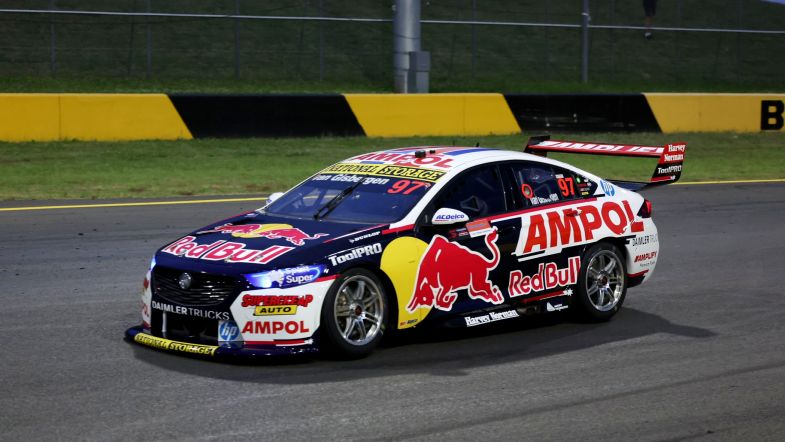 Shane van Gisbergen recovered from time lost in a delayed opening pitstop to secure a dramatic win in the opening 250km Supercars race of the weekend at Sydney Motorsport Park.

Anton De Pasquale had qualified on pole but when the lights went out it was Jamie Whincup who got the better start to lead through turn one, with De Pasquale holding off van Gisbergen going into turn two.

The two Triple Eight Holdens had both elected to run the supersoft tyre rather than the hard for the opening stint, with van Gisbergen wasting little time in getting ahead of De Paaquale on lap two to move into second spot, with Will Davison, Scott Pye and Nick Percat rounding out the early top six.

Further down the order, the returning Dvid Reynolds was forced off track on the opening lap to lose places but was soon recovering back up the order having also gone with the supersoft tyre.

Pye quickly moved his way ahead of Davison into fourth spot, with Zane Goddard also following suite to leave De Pasquale as the only driver in the top five on the hard tyre. Pye then put pressure on De Pasquale before nipping ahead on lap five, with the race then going under caution on lap seven when the car of MacAuley Jones stopped on the side of the circuit with engine issues

With the pit window having just opened, the entire field dived in for the first mandatory stops, leading to plenty of congestion as teams were forced to double stack drivers.

Whincup resumed behind the safety car in the lead ahead of Pye and De Pasquale, with Goddard, Reynolds and Brodie Kostecki rounding out the top six and Cam Waters back in eighth the leading driver on the supersoft.

Van Gisbergen meanwhile emerged from the stops sitting in ninth having been one of those to lose out whilst waiting for his team-mate to be serviced.

The action resumed on lap ten and Waters was a man on a mission as he looked to make the most of his tyre choice, rocketing up into second spot within a lap and a half of the restart and then grabbing the lead from Whincup going into turn two on lap twelve.

Team-mate Jack Le Brocq, who had also swapped onto the supersoft also charged his way through the order to move up into second spot with Will Brown following him through to leave three supersoft-shod cars in the podium positions.

Amongst those drivers still room on the hard tyre De Pasquale was the one who was struggling as the polesitter found himself slipping back down into eighth place by the end of lap 14, the DJR driver not happy with a forceful move the position from Kostecki on his way through.

With the super soft tyre noticeably quicker than the hard, the leading three soon started to break away and were joined by James Courtney as he brought a third Tickford car into the top four.

The performance of the tyre had been one of the big unknowns going into the race, with the short nature of the opening stint answering none of the questions about long the softer option would last.

Waters however was taking full advantage of the fact that the tyre holding on longer than many had expected as he opened up a five second lead over Le Brocq, with Whincup on the hard tyre in fifth slipping more than 20 seconds behind as the first third of the race was completed.

Pye and Kostecki were close behind Whincup with Bryce Fullwood up into eighth as the only other driver on the softer tyre. Fullwood was another driver to pull a forceful move on De Pasquale that would leave the Mustang with damage to the right rear, with van Gisbergen also getting ahead to demote the Ford back to tenth.

Fullwood was the first driver on the supersoft to pit for a second time at the end of lap 29 when the right rear tyre cried enough but the leading four would continue on track, even though Whincup was now lapping quicker – with the quartet trying to stay out as long as possible before coming back in.

Le Brocq went to lap 33 before he came in to swap back onto the hard tyres and Waters followed suit a lap later; almost colliding with Fullwood who was up the inside coming through the final corner. Courtney also then pitted to leave Brown out front as the only driver left on the supersoft, with Whincup and van Gisbergen behind; the latter having fought his way up the order during his second stint.

Brown went to lap 38 before stopping but his long stint on the supersoft gave a number of teams the confidence to try and run longer than planned on the run to the flag, with Kostecki, De Pasquale and Chaz Mostert all pitting before Brown to switch to the supersoft rubber.

Van Gisbergen pitted for a second time at the end of lap 44 and went back onto the supersoft tyre he had run at the start, with Whincup following suit a lap later.

When Zane Goddard then became the final driver to make the mandatory second stop, it was Waters who reclaimed the lead of the race from Brown and Le Brocq with Kostecki the best placed runner now on the supersoft having fought his way ahead of Courtney.

Kostecki however found himself more than 20 seconds behind Waters and needing to gain the best part of a second a lap to try and chase down the leader.

There was a sting in the tail coming however, with light rain starting to fall to make circuit conditions increasingly greasy.

As Waters continued to lead the way, Brown in second was closing in on the lead, with Le Brocq sitting third but with Kostecki closing in. With ten laps to go, Kostecki grabbed third spot with Mostert following him through and the pair then set off after the top two – who found themselves almost together with seven laps remaining.

With the rain getting heavier, Mostert grabbed third from Kostecki going into turn two after he wide through turn one with six laps to go and van Gisbergen then cleared Kostecki at the end of the lap to move fourth as his recovery from the time lost in his first stop continued.

Despite being on a set of used supersofts, van Gisbergen then got the undercut on Mostert to grab third spot and with four laps to go, the points leader was now within four seconds of the lead.

Within a lap, van Gisbergen had closed in on Brown and nipped ahead at turn three before grabbing the lead from Waters to leave him out front with two to go.

Whincup was following his team-mate through the order and having got ahead of Mostert, he made light work of both Brown and Waters to leave the two Triple Eight cars at the head of the field.

Van Gisbergen duly took the flag for a win that moves him closer to the title ahead of Whincup, with Waters holding on to take the final place on the podium with third.

Brown would lose out late on as De Pasquale, Mostert and Pye all cleared the Holden on the final two laps, with the top ten being completed by Percat, Kostecki and Will Davison.