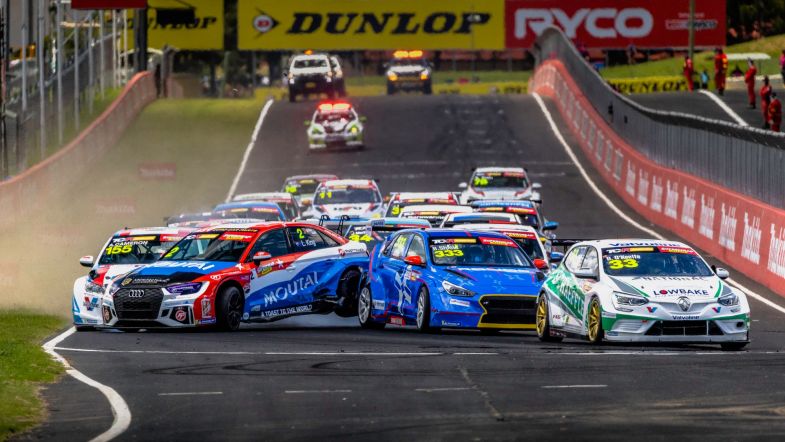 Jordan Cox won an eventful second TCR Australia race at Bathurst from the back of the grid, heading Race 1 winner Aaron Cameron home by just six tenths of a second.

Renault driver Dylan O’Keefe started from the reversed grid pole position and claimed the lead while there was trouble right behind.

Luke King (Audi), who started second, was sandwiched between Brad Shiels (Hyundai) and Aaron Cameron (Peugeot), with the Audi driver being sent into a spin at Hell Corner and had to head into the pits for repairs.

Trouble also hit pole sitter O’Keefe who made a mistake at The Chase and spun his Mégane, later retiring due to a puncture.

Josh Buchan of HMO Customer Racing and GRM driver Ben Bargwanna came together on lap three in the fight for eighth position, resulting in a retirement for both drivers.

Alfa Romeo Giulietta TCR driver Cox made strong progress from 16th on the grid and made contact with the top three on lap seven.

Cox made the move for the lead on lap ten at Skyline, passing fellow Alfa Romeo driver Michael Caruso.

Caruso’s race ended three laps later as he suffered a puncture and beached his car in the gravel at The Chase, bringing the safety car on track.

Cox was able to stay ahead during the final lap of action as the safety car headed in, winning the race ahead of Cameron and Jason Bargwanna.