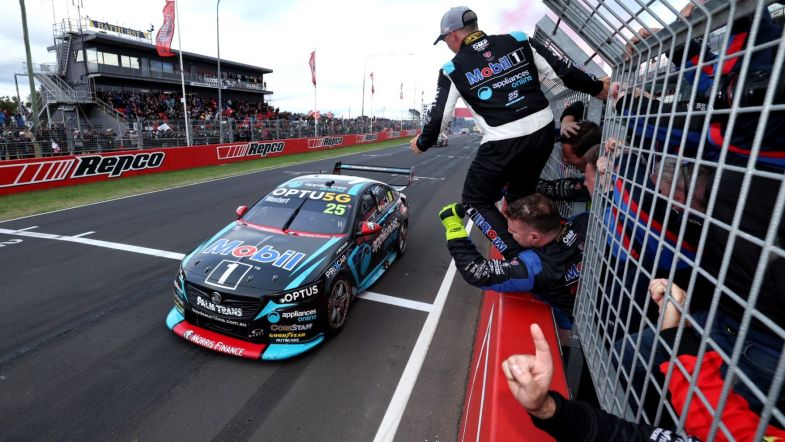 Chaz Mostert and Lee Holdsworth overcame a delaminated tyre in the second hour of the Bathurst 1000 to secure victory in the final race of the 2021 Supercars Championship season.

The #25 Holden would be the class of the field throughout the race having qualified on pole, with the pair overcoming the early issue to ensure they were back at the front of the field heading into the sixth hour of racing and the run to the flag.

A series of searing laps after the fourth caution of the race had allowed Mostert to eek out a lead of approaching three seconds going into the final 30 laps of the race, with Shane van Gisbergen not quite able to keep pace with the #25 car.

As Mostert extended his advantage out towards four seconds, Brodie Kostecki continued to keep Cam Waters at bay in the fight for third place, with Nick Percat in fifth spot having enough in hand to prevent Bryce Fullwood from moving up from sixth.

Will Davison and Jamie Whincup rounded out the top eight, although Davison was facing a five second penalty to be served in his final stop for the earlier clash between the pair in the pits.

Running outside the top ten, Jack Le Brocq was the first driver to pit for the final time on lap 137 but the big story came next time around as Mostert came in from the lead, with Kostecki following him in from third.

Triple Eight waited just a single lap before van Gisbergen came in to be fuelled to the finish as did Waters and Percat – with van Gisbergen carrying to much speed into the lane that he almost overshot the speed limit line.

The #888 was dropped from the jacks just as Mostert passed by but seconds later, Anton De Pasquale’s Mustang ground to a halt on the exit of The Cutting to trigger another Safety Car – leaving the remaining cars to dive in to complete their final stops.

That meant that as De Pasquale’s car was recovered, Mostert held the lead from van Gisbergen and Waters, who had managed to get ahead of Kostecki in the stops, with Whincup heading into the final 20 laps of his full-time career in fifth and Fullwood rounding out the top six.

Percat held seventh ahead of James Courtney as the #44 recovered from Thomas Randle’s early off track excursion at turn one, with Broc Feeney and Todd Hazelwood in tenth as the field was released once again.

With Triple Eight have tweaked the #888 in the final stop, 19 laps remained when the action resumed and Mostert bolted once again on the restart – going early on the exit of The Chase to get the jump on van Gisbergen as the field streamed back up the Mountain for the 143rd time.

However, back in the pack, Feeney clattered into the wall on the exit of Reid Park and smashed the right front suspension, with the car then sliding off into the gravel at McPhillamy Park – sending the race under caution for a sixth time.

The restart came on lap 146 and yet again, Mostert was able to hold onto his advantage ahead of van Gisbergen and led by more than a second by the end of the lap, with Waters a further second back in third.

The #6 had the pace to keep Kostecki behind, but Waters was powerless to match Mostert and van Gisbergen as the leading duo edged away, lapping with a tenth of a second of each other lap-after-lap as the fight for victory became a two-car affair.

Van Gisbergen has a slight moment going over the Mountain on lap 151 just as Mostert turned the screw, extending his advantage out to more than two seconds going into the final ten laps of the race – with the positions remaining static elsewhere in the top ten.

With just seven laps to go, there was a further twist to the race as van Gisbergen started to slow with a front right tyre issue, although there was a scare for Kostecki when he clipped the wall at Reid Park whilst passing the stricken #888 car as the champion tried to bring the car back to the pits.

That left Mostert with a lead of more than five seconds over Waters with five laps left to run, with Kostecki sitting third from Whincup, Fullwood and Percat.

With the pressure lifted following van Gisbergen’s demise, Mostert was able to adapt his driving for the final laps to keep the #25 car away from the kerbs and brought the car to the finish for his second victory in Australia’s biggest race, with team-mate Lee Holdsworth adding a Bathurst win to his resume.

A first win at Mount Panoroma in a decade for the team came by a margin of 3.7 seconds at the flag as Waters brought the #6 car home in second spot ahead of Brodie Kostecki, who took his maiden Bathurst podium in third spot alongside David Russell.

Whincup had to settle for fourth spot to bring the curtain down on his full-time career ahead of Fullwood and Percat, with Courtney, Hazelwood, Slade and Will Davison rounding out the top ten.

Van Gisbergen would end up back in 18th after his late issue as the final driver on the lead lap.