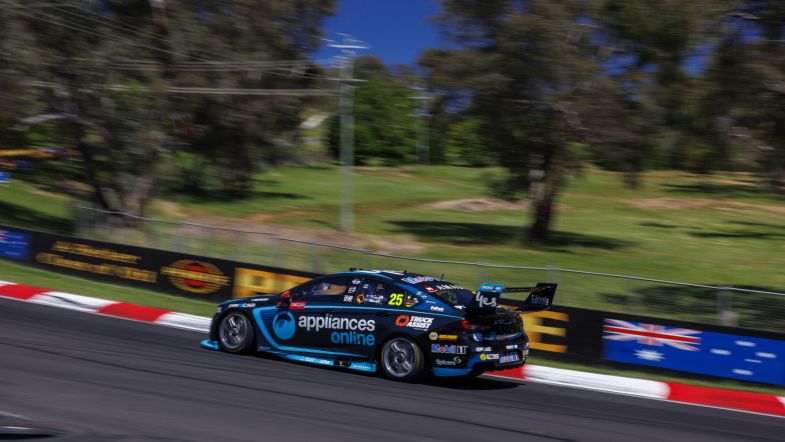 Lee Holdsworth produced a fine opening hour of the 2021 Bathurst 1000 to hold the early lead of the biggest race on the Supercars calendar.

The race kicked off with most of the field electing to run the co-drivers first, meaning Holdsworth led the grid away in the #25 Holden that Chaz Mostert had taken to pole in record-breaking fashion in the shootout.

Into turn one however it was Tony D’Alberto that grabbed the lead in the #11 Mustang, with Garth Tander jumping up into third spot. James Moffat meanwhile was the man to get away badly off the line as he slipped back six spots to ninth from the second row.

D’Alberto led the field through to the Chase before Holdsworth slipped back up the inside to retake the lead of the race, with Tander then nipping ahead of the Mustang into second spot on the run to Murray’s and the end of lap one.

Although the opening few laps would largely pass without drama, there were problems for the Team 18 entry of James Golding and Scott Pye, with Golding running off at The Chase with an apparent steering issue on lap two that saw him return to the pits – immediately dropping the #20 entry off the lead lap.

Although Golding was able to return to the track, the issue was clearly not resolved as the car – which had undergone a rack change earlier in the day – headed straight back into the pits and into the garage for repairs.

Out front, Holdsworth established an early buffer over Tander to move three seconds clear by the end of lap five, with D’Alberto dropping away from second by a similar margin as he led the two DJR entries.

Fifth spot was being held by Tim Slade – the first regular driver to have taken the start – but he then went up the inside of Alex Davison into turn one to get ahead of the #17 Mustang, with Dale Wood in the first of the Brad Jones Racing cars holding sixth.

Elsewhere, Will Brown’s Erebus car – the pace setter in qualifying was back in eleventh spot early on with Craig Lowndes back in 14th having lost ground in the car being shared by Jamie Whincup in his final Supercars race.

The Triple Eight-run Wildcard of Broc Feeney and Russell Ingall found itself running ahead of the #88 car, with young gun Feeney having made up three spots early on to run in P12.

Brown and Feeney both moved up into the top ten on lap ten when Moffatt and Bryce Fullwood went side-by-side going into The Chase and both ran wide across the grass on the exit – with Moffat rejoining back in P12 and Fullwood falling back into 14th.

As things settled down at the front, the first of the mandatory stops took place at the end of lap 13 as Super2 racer Jayden Ojeda brought the #35 Holden in from 23rd spot for fuel and tyres, with Mark Winterbottom, Luke Youlden and Gary Jacobsen – the latter pair who had been dicing together on track in the early stages – all then coming in a lap later and electing to change drivers.

Zak Best in the Tickford entry he shares with Jack le Broq grabbed sixth from Wood into turn one but there was drama at the same corner a few laps later when Thomas Randle ran off in the sister Mustang and went into the tyres – bringing out the safety car and leading to a scramble for the pits amongst all of those cars that hadn’t already stopped for the first time.

Holdsworth rejoined in the lead ahead of Tander and D’Alberto, with Tim Blanchard keeping the #3 car in fourth spot as he took over from Slade with Brodie Kostecki jumping up into fifth spot thanks to the fact that David Russell had already pitted in the #99 before the caution. Wood retained sixth from Jack Perkins and Warren Luff, with Cam Waters and Michael Caruso rounding out the top ten.

Amongst those to lose out during the first stops, Alex Davison rejoined back in 18th having been forced to wait in the pits whilst D’Alberto was serviced ahead.

With Randle’s car recovered from the gravel, the action resumed on lap 19 with Holdsworth controlling things from the front to retain the lead from Tander and D’Alberto, with the only changes in the top ten seeing Kostecki get ahead of Blanchard, and Waters take the #6 Mustang up into eighth ahead of Luff.

Kostecki then grabbed third into Forrest’s Elbow on lap 20 when he slipped up the inside of D’Alberto, whilst the #88 Holden hit the top ten for the first time in the race as Whincup moved ahead of both Caruso and then Luff to go ninth.

Waters was the man on a move as he made up ground to worked his way up into the top six and then went side-by-side with Blanchard running down Conrod Straight before taking fifth, with Whincup behind clearing both Jack Perkins and then Dale Wood to go seventh.

The recovery for the #6 continued as Waters claimed fourth from D’Alberto on lap 24 with a solid move at Forrest’s Elbow before setting off after Kostecki.

As the opening hour of the race was completed, Holdsworth continued to lead the way having opened up a lead of little over five seconds over Tander, with Brodie Kostecki retaining third from Waters, with D’Alberto and Blanchard rounding out the top six – albeit with the latter under pressure from Whincup.