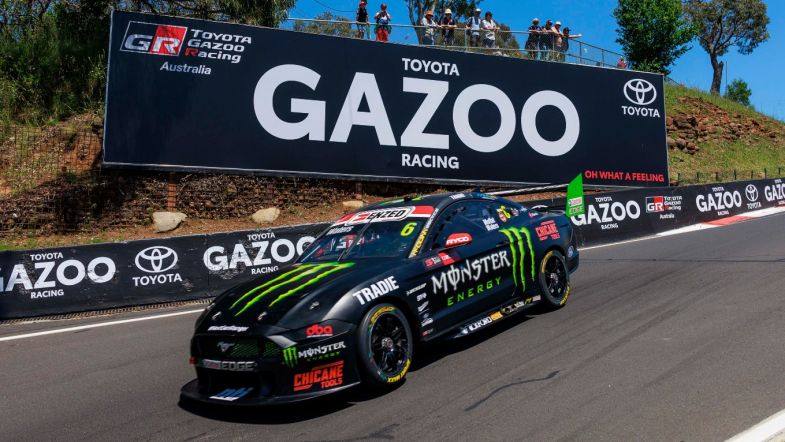 The second hour kicked off with Holdsworth continuing to control things from the front for Walkinshaw Andretti United, with the #25 Commodore edging away from Garth Tander in the first of the Triple Eight cars.

Brodie Kostecki continued to run in the #99 Erebus entry but drama would hit the sister car as Jack Perkins forced to bring a smoking #9 entry in from ninth spot with power steering failure; the car heading straight into the garage for repairs but with any chance of victory disappearing as it was forced to spend half an hour in the pits and dropped 14 laps off the leaders.

Just as Perkins came in, James Golding headed out to rejoin the race in the #20 Team 18 entry which had spent most of the opening hour in the pits with steering problems of its own but it would prove to be a false dawn for the team once again as the car came straight back in once again.

Holdsworth saw some of his advantage at the front cut on the following laps as drivers dealt with oil dropped by Perkins across the top of the Mountain, although he remained more than four seconds ahead of Tander with Kostecki, Cam Waters and Tony D’Alberto behind.

Tim Blanchard was continuing to run in sixth but lost the spot to Jamie Whincup at Murray’s on lap 32.

Waters moved into third ahead of Kostecki just before the latter pitted at the end of lap 33 for his second spot, with the team electing to change the brakes on the #99 car before he rejoined.

Holdsworth had extended his lead to over six seconds once again before he came in at the end of lap 37 for a second stop, with Tander taking over the lead of the race from D’Alberto and Whincup as Waters also pitted from third spot.

Mostert climbed aboard the #25 for his first stint and rejoined comfortably ahead of the other cars to have made a second stop, with Whincup, Blanchard and Warren Luff coming in a lap later.

That left Tander, D’Alberto, Dale Wood and Russell Ingall as the top four, with Mostert in the defacto lead of the race in P5 as the second round of mandatory stops cycled through.

Mostert cleared Ingall to move into fourth spot before Tander, D’Alberto and Wood all came in at the end of lap 40 – allowing the polesitter to reclaim the lead but meaning a number of the leading cars were now slightly out of kilter on fuel.

It meant that after the second stops, Mostert held an advantage of more than ten seconds over Waters, with Kostecki now in third and Shane van Gisbergen rejoining in fourth in the #888 entry having taken over from Tander.

Anton de Pasquale was also now on track for his first stint having taken over from D’Alberto and held fifth, with Whincup, Blanchard, David Reynolds, Nick Percat and Luff rounding out the top ten.

As the race started to settle down, Mostert continued to edge away from Waters behind, with the gap between the pair growing to more than 13 seconds and Kostecki keeping van Gisbergen at bay for third – with the champion elect one of a number of drivers to report issues with the dashboard on his car.

Suddenly however, the leader hit trouble, with Mostert slowing as he came across the top of the Mountain on lap 49 before coming into the pits – where it quickly became clear that the left rear tyre had delaminated.

That put Waters up into the lead of the race from Kostecki and van Gisbergen, with the top three covered by little more than second seconds. Mostert meanwhile would rejoin back in twelfth spot and was now running an alternative strategy to the rest of the pack having dropped 45 seconds off the lead.

Mostert quickly got back into the top ten after David Reynolds pitted and he then edged ahead of Jack le Brocq as the third round of stops began.

It meant as the two hour mark hit, Waters led from van Gisbergen and Whincup, with Brodie Kostecki having brought the #99 in from second to hand over to David Russell just before the close of the hour.